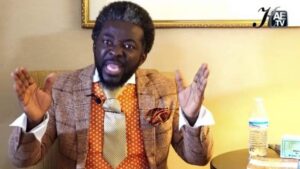 Papa Shee has recently been the subject of immense criticism following his controversial viral take on how to get a phone call with many social media enthusiasts labeling his claims as false, unfounded and hallucinations.

Responding to his critics and those who doubt his revelations about answering phone calls in an exclusive interview with Amansan Krakye monitored by Ghgossip.com Papa Shee said that everyone who speaks ill of him on social media has a superficial understanding of the unveiled mysteries of the world.

“There are many things we used to believe, but when God comes into your life, he opens your eyes to see beyond the ordinary. Words are very powerful but the Bible says that the thief comes to rob you, kill you and destroy you.

“It was in recent times that the mobile phone arrived that this Hello and Hello arrived but it was supposed to be Hallelujah, praise the Lord or Amen. The devil always steals the word of God and adorns it to confuse God’s children, ”he stated on Kastle FM.

“It is God who has called me and opened my eyes to unravel some of the mysteries of this world. Some people are so steeped in worldly pleasures that when they hear things like this they think you are lying. Many people are Christians who go to church, but they have been blinded and their ears blocked from the truth, ”he told the host.

“But it is not me who says these things, it is God who speaks through me. I’ve been doing evangelism for the last 12 years, “he added.