The soldier, whose identity could not be immediately ascertained reportedly accosted the lady around 9:47 am on Saturday, December 5, 2020.

The lady, who was clad in a pair of shorts and white knitted coverup, was trekking on the road when she was assaulted. 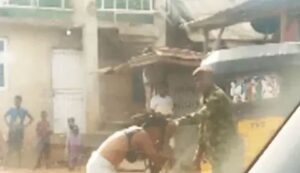 The soldier was said to have alighted from a commercial bus and descended on the lady unprovoked.

Eyewitnesses said that the soldier slapped the young lady repeatedly.

They added that when the lady attempted to run away from the assault, the angry soldier pulled her back violently with her braided long hair.

The soldier yanked off the lady’s blouse and was about to remove her bra when passersby intervened.

The passersby reportedly begged the soldier repeatedly before he let go of the lady, after which he joined the commercial bus he was riding in and the driver drove off.

Recall that on November 2, a video of some soldiers beating up a woman over indecent dressing in Oyo State, went viral.

Officers were seen using horsewhip on a lady for allegedly dressing indecently at Beere are of Ibadan, the state capital.

Other residents of the state claimed that the army officers assaulted them over their hairstyles and other flimsy excuses.