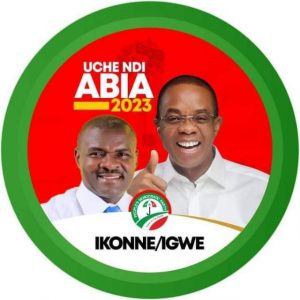 Barr. Phillip Okey Igwe was born of very noble parentage to the late Elder Joseph Igwe & Ezinne Oyiridiya Roselyn Igwe of Umuogele in Amuda Isuochi, Umunneochi LGA of Abia State.
Okey is the fourth son in a family of five boys and two girls. Born and bred in his hometown of Isuochi, he started his early education by attending Isuochi Central School where he obtained his (FSLC) in flying colors. He attended Commercial school to acquire vocational skills for a couple of years in Owerri before taking the entrance exam to secondary education (this was largely due to hardship occasioned by his father’s recent passing at the time). After a brief stay at Isuochi Secondary School where he spent two years, he subsequently completed his secondary education at the prestigious Dennis Memorial Grammar School (DMGS) Onitsha for his (WAEC/SSCE). He gained admission to study pharmacy at the renowned University of Ibadan (U.I.) where he spent two years. The prolonged ASUU strike around the late 1990s period did not allow him finish at UI.

In the year 2000, Okey’s desire for knowledge took him outside the shores of this country and to the United States. He attended Chapman University, Orange County, in California, U.S.A. for a Bachelors (BA) Degree in Criminal Justice in 2004.
His intense drive to succeed took him to North Carolina where he obtained his Jurist Doctor (JD) in Law, from the North Carolina Central University School of Law in 2009. He obtained his license to practice law in the state of New York in 2010 and practiced for a while in New York City at the prestigious law firm of Shaw & Associates. Subsequently, he returned home to obtain his BL degree from the Nigerian Law School and Nigerian law license in 2011 and 2012 respectively.

He is a veteran of US Military having served four years of active duty in the United States Air Force during the Iraq combat years and in the years immediately after the September 11, 2001 terrorist attacks in New York.
He was called to the New York State Bar in 2010 and is a member of the American Bar Association; New York Bar Association, & American Immigration Lawyers Association.

He came back to Nigeria in 2011 to attend the Nigerian Law School, Abuja, where he distinguished himself, for his Bachelor of Laws (BL) qualification to be called equally to the Nigerian Bar, and is a very outspoken member of the Nigerian Bar Association, based in Lagos.
He founded and is the Principal Partner of Lagem Firma & Partners, an internationally reputable firm of highly respectable and seasoned attorneys.
He was the Executive Director of Chrisnak Group including the trail-blazing Mainland Oil & Gas of International repute. He founded and was the pioneer publisher/CEO of The Oracle Today Newspapers Ltd.

Buoyed by a strong desire to render public service, In 2016, he contested and was elected the Executive Chairman of Umunneochi LGA where he carved out a niche for himself in local administration by delivering critical local infrastructures to the people, especially the restoration of electricity to the local government after decades without electricity. At the end of his tenure as executive chairman, his good works spoke loudly as he was overwhelmingly elected to the state house of assembly in a hotly contested election where he unseated a formidable incumbent and other strong contenders. In the House of Assembly, he is distinguishably one of the leading voices of the Seventh Abia House of Assembly. His landmark bill (HAB-12) aimed at liberalizing the power sector and establishing an energy policy for Abia State is at Committee of the Whole and due for final passage soon. Hon. Okey has also focused on road rehabilitation, energizing local communities, attracting laudable projects, indigent widows’ direct cash empowerment and getting young constituents employed among other remarkable achievements in his three years in office so far.

Barr. Okey Igwe is a deeply spiritual and devout Christian man. His parents are original Methodists that later converted to the United Church of Christ (UCC) – he actively attends both churches in Isuochi. In Lagos, he worships at Dominion Faith International Ministry where his elder brother, Pst. Paul Igwe is the presiding pastor. In the United States he worships at both the Brooklyn Tabernacle and Elevation Church – both powerful gospel/music-based Ministries.

Okey is an avid sports lover – soccer, football, basketball, baseball, tennis. He plays each of this sports especially tennis regularly. He loves reading and writing and has authored many articles on National issues. He is widely traveled and loves exploring different cultures and foods. Lately, his passion for music has seen him develop into an intermediate level piano player.