Operatives of the Delta State Police Command have arrested three suspected armed robbers in Orerokpe and Sapele areas of the state. 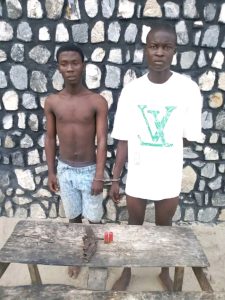 Spokesperson of the command, DSP Bright Edafe, in a statement on Tuesday, November 8, 2022, said one locally made gun and a stolen Lexus SUV were recovered from the suspects.

According to the PPRO, one of the suspects, Idowu James, shot a driver identified as Victor Olori and snatched the vehicle from him around Ebrumede Area of Sapele.

“On receipt of this information, the DPO Orerokpe mobilized and led the patrol team to the scene. The hoodlums took to their heels on sighting the Police but the team succeeded in arresting one of the suspects named Desmond Ejinyere ‘m’ 18yrs while others escaped into the bush

“One locally made cut-to-size double barrel gun and two live cartridges were recovered. While combing the bush, another member of the gang one Joshua Emoefe ‘m’ 20yrs of Abraka Street Orerokpe was also arrested. Manhunt for the fleeing members of the gang is ongoing. 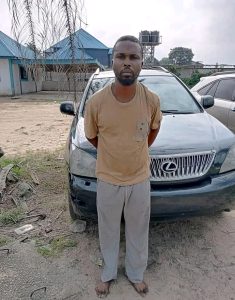 “The driver who was the lone occupant of the vehicle jumped out of the vehicle and fled into a nearby bush in a bid to escape. He was given a hot chase by the operatives and was arrested.

“During investigation, suspect was identified as Idowu James ‘m’ 28yrs of No. 25 Kareem Oyeladi Street Mangoro Agege Lagos State. When the car was searched, documents bearing the name of one Victor Olori were recovered 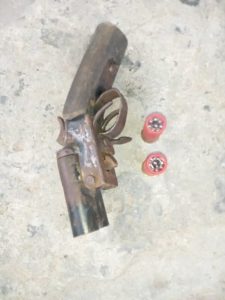 “When phone call was put across to the phone number found in the document, one man (name withheld) answered and informed the police that the vehicle was snatched at gun point from his son (name withheld) on the 4/11/2022 at about 1900hrs around Ebrumede Area during which he was shot and currently receiving treatment. Suspect is in custody aiding investigation.”