The three Justices that sat on the Court of Appeal panel that quashed the 15-count terrorism charge the Federal Government preferred against the detained leader of the Indigenous People of Biafra, IPOB, Nnamdi Kanu, have been transferred from their various divisions. 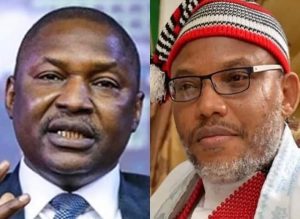 Investigation by Vanguard revealed that the three appellate court justices were transferred, four days after they delivered the judgement that discharged the embattled IPOB leader.

Whereas the presiding Justice, Jummai Hanatu Sankey, who was hitherto in the Gombe Division of the court, has been moved to Awka Division, Justice Oludotun Adetope-Okojie who delivered the lead judgement, was transferred to Owerri, while the third member of the panel, Justice Ebiowei Tobi, was moved to Gombe.

A memo dated October 17, which was signed by the President of the Court of Appeal, Justice Monica Dongban-Mensem, stressed that the new posting for the justices was with immediate effect as they were expected to report to their new stations by October 21.

Meanwhile, the Supreme Court is set to hear the appeal FG filed to stet aside the judgement that freed Kanu.

FG, in the notice of appeal it hinged on seven grounds, wants the apex court to stay the execution of the judgement the appellate court delivered on October 13.

It is, among other things, contending that the appellate court panel erred in law and occasioned a miscarriage of justice when it relied on the manner Kanu was renditioned from Kenya to Nigeria after he jumped bail the trial court granted to him in 2017, to quash the entire charge against him.

It maintained that the appellate court acted in error by striking out the charge against the IPOB leader on the premise that the trial judge no longer had the jurisdiction to handle the matter.

Therefore, FG, through the office of the Attorney-General of the Federation and Minister of Justice, is praying the apex court to in the interim, suspend the execution of the Court of Appeal verdict, pending the hearing and determination of its appeal.

It will be recalled that the appellate court had in a unanimous judgement by the three-man panel of justices, accused FG of flagrantly violating all known laws in the way it forcefully rendered Kanu from Kenya to the country for the continuation of his trial.

It held that such extraordinary rendition, without adherence to due process of the law, was a gross violation of all international conventions, treaties, protocols and guidelines that Nigeria is signatory to, as well as a breach of the Appellant’s fundamental human rights.

More so, the appellate court noted that FG failed to refute the allegation that the IPOB leader was in Kenya and that he was abducted and brought back to the country without any extradition proceeding.

It held that FG was “ominously silent on the issue”, which it described as very pivotal in determining whether the trial court would still have the jurisdiction to continue with the criminal proceeding before it.

The appellate court held that FG’s action tainted the entire proceeding it initiated against Kanu and amounted to “an abuse of criminal prosecution in general”.

“The court will never shy away from calling the Executive to order when it tilts towards Executive recklessness”, the appellate court held, even as it accused FG of engaging in “serious abuse of power”.