Hisbah arrests man for putting himself up for sale

Hisbah boss Harun Ibn Sina said it is forbidden in Islam to put oneself up for sale for any reason. 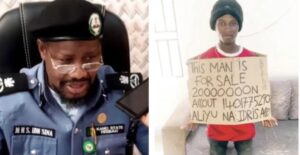 Aliyu Na Idris who has been making rounds on the internet for putting himself up for sale has been arrested by Hisbah, Sharia-inspired police outfit in Kano.

Mr Aliyu who worked as a tailor before deciding to sell himself told reporters that he was putting himself up for sale for N20 million because of poverty.

He added that his parents are aware of his decision and he already made plans on how to spend the money which includes a plan to pay N5 million as tax to the government, N10 million to his parents, N2 million to whoever gets him a buyer, and N3 million to his buyer for his upkeep.

He was however arrested by Hisbah police in Kano.
According to Sheik Harun Ibn Sina, head of Hisbah, who confirmed the arrested, that it is forbidden in Islam to put oneself up for sale for any reason.

“Yes, we arrested him yesterday, and he spent the night in custody but I have not spoken with him,” he said