I deliberately said I will get to the root of this issue today. 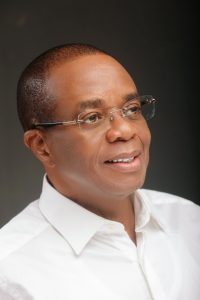 Prof. Ikonne’s viral video regarding his stewardship at Abia State Polytechnic, obviously did not go down well with some persons fronting as opposition. They had wanted everyone to believe that Prof. Ikonne was part of the Abia Poly challenge, even when an investigative panel of 2016 did not implicate the erudite Professor of Optometry who was sent to Abia Poly as Acting Rector. 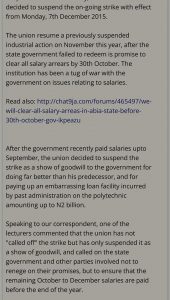 For emphasis sake, Prof. Ikonne said in the viral video that he paid 9 months arrears in addition to his 14 months salaries when he was sent from his DVC position in ABSU to AbiaPoly on a rescue mission. He left one single month of October because he went back to ABSU and took up Vice Chancellorship position same day.

One of the new opposition recruits Mr Dom Nik in a bid to discredit Prof. Ikonne’s claim, surfed the internet and was disappointed to his bone marrow when he saw the fact in one of the blogs. He resorted to turning the news by its head by deliberately cutting out the part that aligned with Prof. Ikonne’s claim.

Mine has always been on campaign with facts. I have listened to Prof. Ikonne. I saw a man that is upright and prudent. I decided to follow up the news only to realize what Dom Nik did. It’s so unfortunate.

I had to go to my search room, lo and behold , I got same news item and it alluded to Prof.ikonne’s fact.

Since morning, all the staff of the school who were hitherto accusing prof of owing back logs are now singing different songs when asked by Abians to present their evidence. One of them who started by disagreeing but was presented with a bigger fact from Onyedikachi Ugbogu , a senior staff of the registry department, said that Prof. paid all the salaries except their corporative…God knows what that means. It was later understood that the young man who left the school in 2017 was never sacked by the Ikonne led management team as was insinuated…Nwa wu ndoli ndoli really…

Now, these are people that are lying against an innocent person but want to be believed by Abians ..

Such an eye opener.

Note : The first picture carries the entire news that exonerated Prof while the second is where Dom and his team cut out the ingredients to deceive the public…