On Saturday, 27 August 2022, Abia State will mark her 31 years of existence as a state government following the split from old Imo state on August 8, 1991. For these period of time Abia state have witnessed nine state governors either as military administrators or democratically elected governors. However, between May 29, 2015 till date, one man has saddled the affairs of the state as an executive governor and his name is Dr Okezie Victor Ikpeazu. 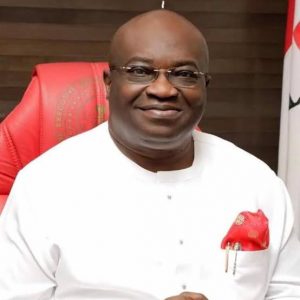 The greatest legacy Governor Okezie Ikpeazu will bequeath to the people of Abia State, may not be the many physical structures and innovations that litter the state. Yes, Ikpeazu has constructed over one hundred roads. He built the first flyover in the state.

He has recovered some of the major roads connecting Aba major markets. He has been intentional in recovering entry point roads into Abia state. Notable are Aba-Ubakala old road; Ekwerazu- Akwa Ibom road; Umuejea-Osokwa Road that leads off Aba-Port Harcourt Express Road straight to Aba. He has equally fixed parts of the notorious federal Aba- Ikot Ekpene express road.

He did the Abiriba- Nkporo road in Ohafia that was long abandoned.A feat that caused the deputy Governor and worthy Ohafia son, Rt Hon Ude Oko Chukwu, to shed tears of joy.

Very early in the life of his administration, he provided counterpart funds thereby activating World bank funding that made it possible for the CSDA to execute some of the notable pro-poor community service projects visible in almost all the local Government areas of Abia state.

He created a new ministry for the SME out of the existing Ministry of Trade and Investment; built an Investment house. Thus, ennobled a one stop integration of veritable SME vistas across the state .

Yes, never in history have people been so proud of made in Aba products and never in history has Aba creatives received the kind of boosted prominence in the world of design and fashion;from Aba to Lagos,Abuja,United Kingdom and America,Aba brand is eminently identified and proudly endorsed.

Ikpeazu became the brand ambassador of made in Aba,a task on himself he entrusted and never abdicated for once in the past seven years.It is on record that Ikpeazu rarely adorned nothing,publicly, but the locally made Aba wears.Who beats that?

He incredibly walked his talk as he took the Aba creatives to national and international exhibitions, and they won laurels.The back to back awards received by Abia creatives even at the annual SME awards organised by the VP Yemi Osibanjo’s is evergreen.

Ikpeazu has robustly facilitated the Geometric power project, a PPP project of Prof Barth Nnaji no doubt but he is key to the present successes recorded in that historic power project that will eventually provide uninterrupted power supply to over seven out of the seventeen local governments areas in Abia state.

Having travelled with Nnaji to most of the countries and participated on the negotiating table where deals and agreements concerning the projects were discussed and sealed, Governor Ikpeazu’s government will hugely share the glory arising from the landmark unprecedented power project.

Ikpeazu will equally take greater part of the credit for the revival of the once moribund Golden Guinea Breweries, innovative and visionary Enyimba Shoe Factory and the ambitious but lofty, Enyimba Economic City etc.

We can go and on. But as the Igbo say, Nkeiruka, the future is supreme.

The governor’s infrastructural contributions will pale into insignificance if in four years or so time, his physical works dilapidate, decay and go into disuse, becoming carcasses for the dumpsite.

So, the governor’s diverse contributions to governance, perhaps, may seem like normal activities, but they are however stemmed from focused and purposeful leadership. It may not be populist, hence not appreciated now, but they are visionary.Moreover, their intangible essence are such that would snowball into visible,concrete impacts in the near future.

Therefore, the best legacy that Ikpeazu will hand over to Ndi Abia is enthronement of a leader that will not only continue his infrastructural development but sustain and build on his intangible achievements.

Abians expect him to prop up a leadership that builds powerful systems not powerful individuals.

By systems, we mean building structures that are self-sustaining and will make an organisation work seamlessly with little effort. You build that by enthroning a leader with an ingrained leadership skills, and is adequately exposed to such systems. ( To be conted…..)