The agents have returned on Friday (today) to ensure their demands are met, citing the urgency of the case. 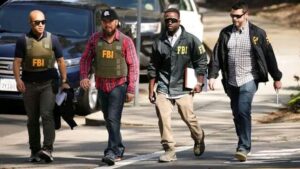 Officials of the Federal Bureau of Investigation have met with the Inspector-General of Police (IGP), Usman Alkali Baba to demand the arrest and extradition of Deputy Commissioner of Police, Abba Kyari to the United States, SaharaReporters learnt.

According to a top source, four FBI agents met with the IGP on Thursday asking that Nigeria’s celebrated cop, Kyari be taken to the United States for interrogation over his role in the activities of suspected serial internet fraudster, Ramon Abbas, more commonly known as Hushpuppi.

The source stated that the agents have returned on Friday (today) to ensure their demands are met, citing the urgency of the case.

He said, “FBI agents met with the IGP yesterday (Thursday) to demand Abba Kyari’s arrest and extradition to the United States citing the urgency of the case. Four FBI agents returned to the IG’s office this morning, they are there asking the IGP to release Kyari for interrogation.”

Meanwhile, as of Thursday night, the Inspector-General of Police, Usman Alkali Baba, had ordered an internal review of the receipt of allegations and indictment processes from the Federal Bureau of Investigation against Kyari.

This was contained in a statement issued by the force’s spokesperson, Frank Mba, on its Facebook page on Thursday night.

The force also stated that it is committed to the pursuit of justice and the strengthening of its professional relationship with the FBI and other international partners.

It assured Nigerians to further communicate developments on the case to members of the public.

The statement read, “Sequel to the receipt of allegations and indictment processes from the Federal Bureau of Investigation (FBI) against one of the personnel of the Nigeria Police Force, DCP Abba Kyari, the Inspector General of Police IGP Usman Alkali Baba psc (+), NPM, fdc has ordered an internal review of the allegations.

“The Nigeria Police Force reaffirms its commitment to the pursuit of justice and the strengthening of its professional relationship with the FBI and other international partners.

“Further developments on this case will be communicated to members of the public accordingly.”

SaharaReporters earlier reported that the United States’ Court had issued a warrant of arrest for Kyari, over his role in Hushpuppi’s multi-million naira fraud probe.

Otis Wright of the United States District Court for the Central District of California ordered the Federal Bureau of Investigation to track down Kyari and produce him in the United States for his role in a multi-million dollar fraud.

Abbas was arrested in Dubai last June and he pleaded guilty to fraud in the U.S. this week.

The FBI said Abbas and Kyari have been friends and were both involved in a conspiracy to launder money.

Hushpuppi had narrated how he bribed Kyari to have one of his rivals arrested and jailed in Nigeria following a dispute over a $1.1 million dupe of a Qatari businessperson.

Abbas had asked Kyari to arrest and jail a fellow fraudster Kelly Chibuzor Vincent after both were locked in a dispute presumably over how to share the $1.1 million loot received from the Qatari businessperson.

Abbas had pleaded guilty to a multi-million fraud earlier this month and faces up to 20 years in jail.

He will be sentenced in the coming weeks and will forfeit some of his assets and his rights to appeal while also paying restitution to victims of his years-long fraud.

Kyari in a statement on Facebook has, however, dismissed the allegations of bribe.