An outspoken Governorship candidate under the platform of the People’s Democratic Party in Abia State, Chief Ncheta Omerekpe, has promised to assuage the perennial problems of payment of Pensioners, and workers salaries if elected as Governor. 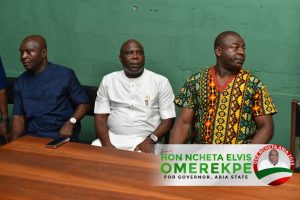 The masses choice, who gave the assurance on Monday in Umuahia North LGA PDP Party office, Abia State while robbing minds with delegates as part of his consultation to LGAs in Abia State ahead of the primaries of the party, stated that he has remained perturbed about the constant complaints regarding payment of pension arrears and workers salaries, pledging to change the situation if elected. 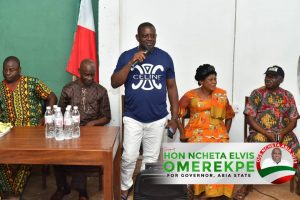 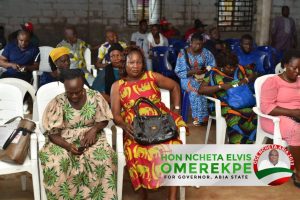 Chief Omerekpe, revealed that he has national and international contacts to change the story of Abia, stressing that modern day leaders should be people with contacts to further attract development to their respective States. 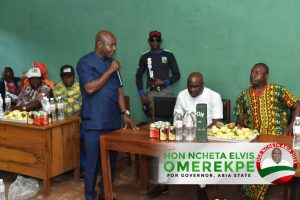 He promised that he is not vying to be Ngwa Governor alone, because he has carried laudable programmes and projects across LGAs in the state which include; sharing of over 400 motorcycles to Abia youth, distribution of over 200 Thousands bags of rice over the past years, treatment of over 50 thousand Abians through the free medical outreach of his foundation, drilling of solar boreholes in communities around him, even extending same to Umukabia Ohuhu among other communities in the state, scholarship programmes. 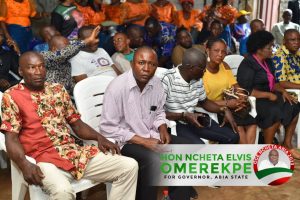 He promised to bring back his investors from the Netherlands for mechanised agricultural programme that will provide jobs for over 300, 000 Abia Youth. 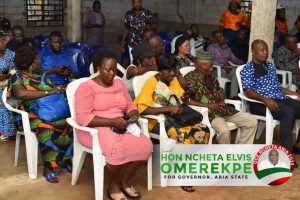 Chief Omerekpe said he has constructed 32 kilometer roads with street lights and drainages, constructed world class skill acquisition centers, noting that he did all these with his personal resources and contact, a feat nobody in Government from Abia state has achieved, past or present and challenged the delegates, asking since he could do all these, why won’t he replicate such feat if elected as Governor with the resources of the state.

The Ofor Ndi Igbo, as he is fondly called, urged delegates not to succumb to intimidations and threats which will come their way during the primaries, charging them to vote according to their conscience and for the future of their children who deserve better life.

Responding, Hon. Okechukwu Obioma, appreciated Chief Omerekpe, for all he has achieved. He stated that there is no better time to liberate Abia than now, appealing to delegates to vote aright as any mistake will affect Abia and her people.

On his part, the leader of the Council, Hon. Peter Iroegbu, said having gone through Chief Omerekpe’s track record and loads of achievements, there is no doubt that he has the wheel power to govern Abia just as he urged delegates to vote according to their conscience and as people with intelligence and fear of God.

Members of Umuahia North Legislative Council were present during the visit. Others are;- Hon. Miller Ogueri ( PDP Chairman, Umuahia North) and Sir Son Obioha, a member of the state Executive of PDP.