After a tug of war between the presidential candidate of the People’s Democratic Party (PDP), Atiku Abubakar and the Governor of Rivers State, Nyesom Wike in the build-up to the 2023 general election, Wike has finally agreed to support Atiku in the presidential election. 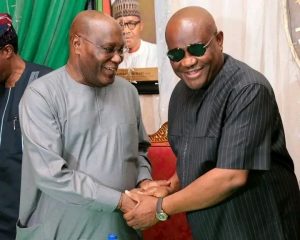 Newsmirrorng had earlier reported that Governor Wike met with PDP governors and other stakeholders of the party, who coordinated his campaign for the presidential ticket behind closed doors at the Rivers State Governor’s Lodge, Asokoro in Abuja.

At the meeting, Wike and some chieftains of the party agreed to work for the success of the party’s presidential candidate after he and some of his colleagues who are in his camp agreed to remain in the party and work for Atiku’s victory in the forthcoming election.

Senate Minority Leader, Philip Aduda, was also at the meeting with some members of the PDP National Assembly caucus.

It could be recalled that former Vice President Atiku Abubakar polled 371 votes to emerge as the PDP’s flagbearer ahead of Wike who scored 237 votes to come second in the party’s presidential primary.

Weeks after the primary was held, the PDP presidential candidate named Governor Ifeanyi Okowa of Delta State as his running mate.