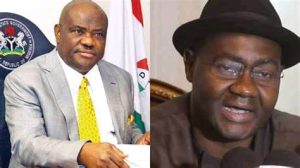 Abe, who was in company of his Deputy Governorship candidate, Dr. Patricia Ogbonnaya, Director General of his campaign organization, Sen. Wilson Ake and some other candidates of the party said they were on their way to Oyigbo when the political thugs blocked their way, threatening them with guns, machetes and other weapons. 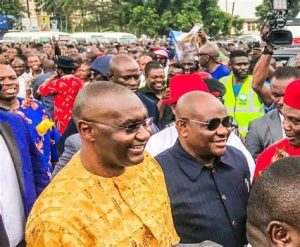 Speaking to journalists on the incident, Abe stated that he and his team had gone to Oyigbo for a town hall meeting that was slated in a in the local government at a hall he built and equipped for the people as part of his constituency project. 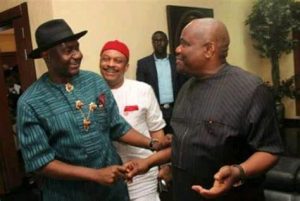 He said thugs who were supporters of the Peoples Democratic Party (PDP) went to the hall scattered the place and locked it up. 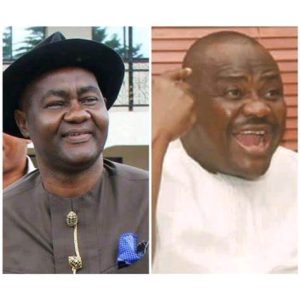 He added that as he and his team approached Egbelu community they were confronted the thugs who were armed with AK-47 rifles and refused them from passing to their destination as it was the enclave of Desmond Akawor.

Abe who said that the blockade was not the first of such threats the SDP was getting from opposition parties in state and have been keeping quiet about it, stressing that the SDP had decided to speak out and condemn the undemocratic act.

He said: “Today however, the matter has gotten to a level we can no longer keep quiet, the country must become aware of what is happening in Rivers state.

“The SDP in Oyibo LGA, this morning, were to hold a stakeholders meeting, the meeting has been on air, just a normal meeting, not a rally.

“I indicated my intentions to attend the meeting in other to encourage our supporters there, pay a condolence visit to one of the Kings, see Chiefs of Oyibo and see one or two prominent people in the area.

“The meeting was to hold in a hall in Ayama, built and furnished by me and donated to the community as my constituency project as a Senator of Rivers South-East Senatorial District.”

“When it was announced on radio that I will hold a meeting there early this morning, thugs, led by the personal assistant of the state chairman of the PDP, Amb. Desmond Akawo, broke into the place, scattered everything and locked the hall.

“When the information was given to me, I quickly informed the police and called my supporters to withdraw, as our principle has been, no provocation, no violence.

“So the meeting was moved to a private compound of one of our supporters, I left there to go and attend the meeting, having been moved from the hall to a private residence.

“When we got to Egberu, the border to Oyibo, the road was blocked by thugs, armed with all kinds of dangerous weapons, guns, machetes, knives; they said that this is the home of Desmond Akawo, and that we cannot enter Oyibo and there can be no SDP in Oyibo Local Government Area.

“I was like, did we mistakenly stray into another country or are we still within the Fedetal Republic of Nigeria?, this happened in broad day light.

“The security operatives attached to me tried to intervene, but against security advice, I came out from the vehicle in an attempt to speak to the thugs; and I said to them, Desmond’s children are not here, but your here, we have come here to share a message of hope, progress and prosperity, with you when we finish talking to you, if you like our message you join but if not you follow your mind.

“But I also have a village and other people have been going to my village campaign, I never stopped anybody,” he said

And Desmom Akawor who sponsored this attack on me and peaceful members of my entourage is somebody we just two days ago at a hotel here in GRA (Port Harcourt) and we embraced, we were hugging each other as friends, yet he had the mind to send children with guns and knives to go and wait for me on the road.

“If I had died there he would have sent a condolence message to my wife pretending to be my friend. These kinds of friends are not good in our society. Leaders of this nature are dangerous to our democracy.

“I will go back to Egberu, and will campaign everywhere in Rivers state, constitutionally permitted to do. It is time Nigerians knew what is going on here in Rivers and attempts that are being made to forcefully and violently stop other political parties from exercising their democratic rights in this state. It will not be allowed. We will not agree to it and will not accept it,” he added.

In his reaction, the Chairman of the Peoples Democratic Party (PDP), Amb. Desmond Akawor, stated; “For me, Abe has enough problems with APC and his people, he should not ascribe it me, he is my friend, we met and hugged each other in a function recently.

“Me, I am very busy this week with commissioning and others, he should not mention my name in things that I am not associated with.

“They are politicians, their only address is politics, I have built enough career for my life that I won’t take thuggery as part of me,” he added.