Why I stoned my two sons to death, by father

A 25-year-old father in Adamawa State, Elisha Tari, has explained why he stoned his two sons to death last week. 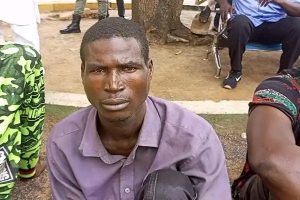 He said he stoned the boys, who are three and five years, because they disobeyed him.

“I asked them to say ‘God’ but they said ‘fire’ instead,” he told newsmen at the Police headquarters in Yola where he is being held over the incident.

The indigene of Himike village in Michika Local Government Area was nabbed last Thursday for allegedly hitting his two children with stones, leading to their death.

Elisha is a local musician whose wife left, leaving the two children with him.

Speaking to newsmen while being paraded with 30 other suspects, Elisha said the children came to him in the kitchen on that fateful day while he was cooking for them and they started a conversation.

He added he got to a point of asking them to say ‘God’ but that they instead said ‘Fire’ and kept repeating ‘fire’, ‘fire’ instead of ‘God’.

“I became provoked with their action as a result of which I picked up stones and hit them on their heads,” he said.

He admitted to being an Indian hemp smoker and inhaler of snuff in addition to taking alcohol drinks.