Kano State Governor, Abdullahi Ganduje, has said the emergence of Peter Obi as the presidential candidate of the Labour Party, LP, is a plus to the ruling party, the All Progressives Congress, APC. 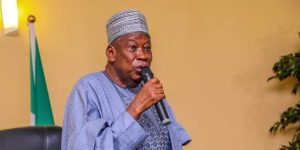 Ganduje in an interview on Channels TV on Monday said it was the Peoples Democratic Party that would suffer the emergence of Obi in the South-East because he would divide the votes of the region, thereby leaving room for the APC presidential candidate, Bola Tinubu, to emerge as the winner.

The governor said, “The emergence of Labour Party with Obi as the presidential candidate, I think is a good omen to APC because our major competitor, contender is PDP and look at it; what is our political investment in the South-East?; the votes we got from Nassarawa local government in Kano metropolitan was much higher than the total votes APC got in the five states of South-East; so you can see that if there is any problem politically in South-East; it is the PDP that will suffer the much.

“So, the emergence of Obi from south eastern part of this country, I think it is something that it is the votes of PDP he will snatch away.”

He added that the emergence of Musa Kwankaso as a presidential candidate of the New Nigeria Political Party, NNPP, was no way a threat to the APC.

“Kwankwaso is a presidential candidate; there’s no doubt about that but equally to say that we are fully on the ground and many of his people are now in our political party so you can see that if Kwankwaso thinks that he can win the party; let him hold a rally or match like this, I assure you, compare them, compare what we have and if he can do.”

“When you talk of the Kwankwaso group, you will see that the group too has reduced in strength because a great number of them remained and came back to APC after seeing that their party will go nowhere in the presidential election; even at the state level we will slug it out but I assure you, APC is a party to beat in Kano State.”