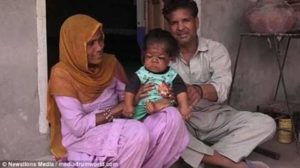 Despite appearances, Manpreet Singh was born in 1995 and so is 23 years old! This young Punjabi Indian came into this world with a very rare condition that stunted his growth at the age of 6 months, making him look like a two-year-old baby.

Surprisingly, unlike many other people with physical difficulties in India, Manpreet is seen as a god and is worshipped by villagers. People come from all over to meet him, even touch him, thinking that he is the reincarnation of a Hindu god.

Manpreet’s family came from a very poor background, and could never afford to have him diagnosed, which therefore made it difficult to determine exactly what his condition was. But considering his physique, his large hands, big feet and looser skin, it was discovered that this little Indian man suffered from Laron syndrome. Doctors from all over the world have given the same diagnosis from afar, after hearing others speak about Manpreet’s case.

As well as the physical impacts, his condition prevented Manpreet from developing mentally as well. At the age of 23, the young man still has the mental age of a baby and is incapable of speaking and communicates only through screams and cries. It is therefore left up to his aunt and uncle to take care of him like a child

Edo guber: Outcome warning to leaders not to take electorate for granted–Oyegun