All Progressives Congress has commenced a suicide mission that can sink the party, except stringent measures are taken, its supporters under the aegis of League of Concerned Christian Youth in the APC, said on Tuesday. 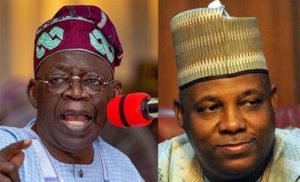 According to them, the decision by the presidential candidate of the APC, Asiwaju Bola Ahmed Tinubu, to choose Senator Kashim Shettima as his running mate had portrayed the party in the most unpleasant light before the generality of Nigerians as a party devoid of religious and ethnic tolerance concerning the plurality of the country.

The convener of the APC-LCCY, Patrick Maiyaki, during a media briefing, stressed the need for the leadership of the party to substitute Shettima with a Christian, saying it would guarantee victory for the party in next year poll.

According to them, the party’s insistence on Muslim-Muslim ticket has caused untold disaffection in its ranks and file.

The Secretary-General of the APC stakeholders, Dauda Yakubu, said the leadership of the APC must address the alleged marginalisation of Christians in the party before September 20 slated by Independent National Electoral Commission to publish the final list of candidates for presidential election.

Yakubu said the choice of Shettima as running mate to Tinubu amounted to insensitivity and utter disrespect for the ethnic and religious plurality of the country.

Maiyaki told journalists on Tuesday that what the APC had done with its policy on Muslim-Muslim ticket was a suicide mission.

“As a group, we believe all hope is not lost as the chances of the APC would be bolstered should the leadership of the party effect a change in the composition of the party’s presidential Ticket.

“The fact that Nigerians have randomly rejected the Muslim-Muslim Ticket before the election indicates that the outcome of the presidential elections would not be any different, hence the need for urgent actions toward rejigging the party’s presidential Ticket for the polls.

“We wish to state that the APC is blessed with an array of Christian candidates that can complement the presidential Ticket with the utmost respect to the vice presidential candidate of the party, Senator Kashim Shettima.

“We are, therefore, using this medium to appeal to the leadership of the party to take advantage of the opportunity to make a replacement for the vice presidential candidate of the party before the expiration of the deadline issued by the Independent National Electoral Commission.

“It behoves the party’s leadership to act before September 20 when the Independent National Electoral Commission is expected to publish the final list of presidential candidates for the 2023 presidential elections.

“As concerned stakeholders of the party, our support for the party remains unflinching. This much we have exhibited on numerous forums, conferences and other public engagements across the country. Our emphasis remains on how to win the elections for the party.

“One of the ways the party can lose the elections is if it goes ahead with the Muslim-Muslim Ticket that has been condemned and rejected by the bulk of Nigerians,” he added..

Maiyaki called on the President Muhammadu Buhari to urgently save the party from electoral misfortunes at the general elections.