News sources coming in indicate that the journalist who was on the camera and captured the embarrassing moment in which Salva Kiir, the South Sudanese president wetted his pants has been reportedly found dead. 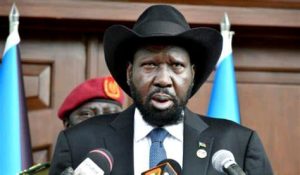 It should be recalled that social media globally was thrown into shock this week. This is after a video of President Salvar Kiir showed him involuntarily wetting his trousers. The incident happened at an inspection of a guard of honor.

While the national anthem was being sung, Kiir looked down at his trousers in shock only to see a stream of urine flowing down. Everyone at the ceremony frowned upon this incident and social media started buzzing right away.

According to a tweet from former EALA and ex-NBS presenter, Bukyana Julius, the journalist who shared this video is now dead. He reportedly committed suicide as his body was found hanging in his residence.

It’s not only this journalist that has apparently got into problems, others too who covered this function are going missing one by one. Others are being found dead as of course one would have expected.
“The journalist who shared the video of president Salva Kir wetting his pants on a national event allegedly committed suicide. His body was found hanging in his residence.

All journalists that covered the state event where the @SouthSudanGov president Salva Kir wetted his pants are missing one by one and some found dead. JOURNALISM IS NOT A CRIME.” he tweeted.

It’s not yet clear if the state has a hand in this but obviously, no one would exonerate it. However, many think it’s the one responsible. 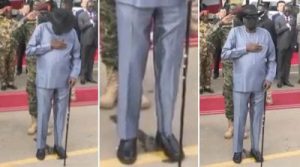 Meanwhile, Salvar Kiir is thought by many to be suffering from old age diseases such as BPH or diabetes. Others have blamed his overstay in power as the reason for this because his body is probably fatigued.