In Six Years, Ikpeazu Has Surpassed Achievements Of All Governors Before Him — Eze Chikamnayo

The newly appointed Commissioner for Information in Abia State, Prince Eze Chikamnayo has said the governor, Okezie Ikpeazu has in six years surpassed the achievements of all other governors before him since the creation of the state, ABN TV reports. 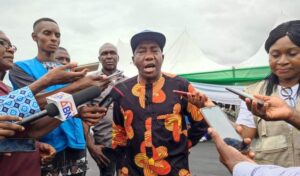 “The pragmatic governor of Abia State, a silent achiever, what he has done in the last six years is bigger and greater that what all other governors before him in the last 30 years since Abia creation have done” he said during the commissioning of Enyimba Automatic Shoe Factory in Abia on Thursday.

According to the commissioner, Gov. Ikpeazu is the first he is seeing who sleeps and wakes up thinking of how to create opportunities for Abians in different areas of the economy.

He said during the project commissioning performed by the Senate President, Senator Ahmed Lawan, Abians went emotional when Lawan said if the shoe factory is the only thing he has done in the state, he would have laid a solid foundation for prosperity.

While acknowledging that Gov. Ikpeazu has made several other achievements in other areas, Chikamnayo was particular about agriculture where he said the governor has created a cluster for those who may have interest in poultry farming, health where he built the tele-health initiative and emergency tele services as well as home paediatric services for the elderly in the state.

He called on people of the state to continue praying for the governor and not to despair.

Recall that Chikamnayo was the Commissioner for Information during administration of former governor Orji Uzor Kalu.