Former Nigerian Vice President and presidential candidate of the Peoples Democratic Party (PDP), Alhaji Atiku Abubakar has promised to restore Nigeria’s Economy, give due attention to education and Security as well as allow States more powers to prioritise areas of development focus when elected and sworn into office as President of Nigeria in 2023. 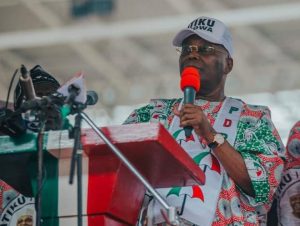 Abubakar who spoke in Uyo at the official flag off of the PDP presidential campaign decried the decay in the country’s economy since PDP left power at the center. The former Vice President stated that PDP left a viable economy and maintained an enviable height in many regards for the country, while re-emphasizing his plans to restore the country’s ailing system and working towards reuniting Nigeria. 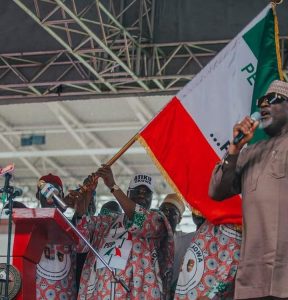 “When we came into government in 1999, we lifted Nigeria from the bottom to the top, getting every sector of the economy to be effective. Since 2015, what has happened? Poverty, insecurity and hardship. Nigerians have seen the difference.” 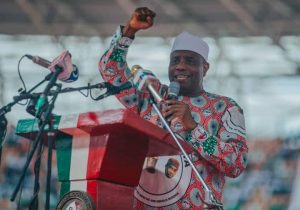 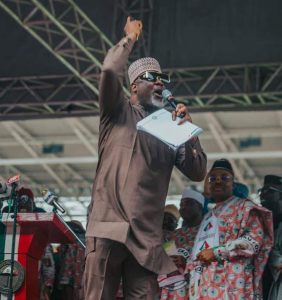 The PDP presidential candidate further observed that many Nigerians aspire to have a country in the mould of Akwa Ibom State, referring to good governance and general development which he said is the product of PDP led government in the state since 1999.
He extolled Governor Udom Emmanuel for his feats in governance and economic development of Akwa Ibom State, adding that the campaign is specially dedicated to Akwa Ibom and its people whom he said have demonstrated goodwill towards PDP. 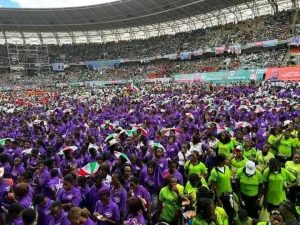 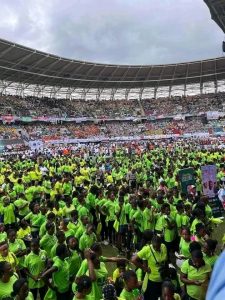 “We dedicate the launching of this campaign to Akwa Ibom PDP for the good governance found here. PDP has remained consistent in Akwa Ibom since 1999 and the model of governance here should be emulated.”

On his part, the Chairman of the PDP Presidential Campaign Council, Governor Udom Emmanuel, pointed that the campaign flag off signifies the commencement of another phase of the journey to restore hope for a better Nigeria which he noted is what Nigerians yearn for.

“The journey of restoring faith and hope in our common entity begins today. We promise Nigerians that as we flag off this campaign today, we flag off hope and possibly of taking Nigeria out of decay into prosperity.”

“Nigerians who were outside the country were willing to come back to the country, but now, Nigerians are in a haste to leave the country. Let it be known that the mission to rescue Nigeria lies within PDP.”

The National Chairman of PDP, Senator Iyorchia Ayu shortly before presenting the party’s flag to Atiku Abubakar and Ifeanyi Okowa, remarked that “Nigerians are waiting for PDP to come and rescue them from what is holding them”, admitted that PDP knows the problems of the country and knows how to solve them.

“We know the problems of Nigeria and how to solve them. Atiku Abubakar and Ifeanyi Okowa are two qualified party men who are capable of leading the country. It is time, we will restore Nigeria to its full glory.”

Lending his voice, the party’s Vice Presidential candidate and governor of Delta State, Dr. Ifeanyi Okowa, expressed satisfaction at the support enjoyed by the party in Akwa Ibom State, noting that PDP has risen to provide the needed leadership in Nigeria that will address issues of governance and economy.

In his words, “we are very impressed by what we see in Akwa Ibom. There is a great challenge, a great problem in the land and PDP has risen to the occasion. Like you would obtain in a war, other parties are presenting lieutenants, but PDP is presenting a general.”

Reassuring the party of unwavering stance and determination to work for the victory of the party across all levels, the Akwa Ibom State PDP Chairman, Rt. Hon. (Elder) Aniekan Akpan, who conveyed the message of all state chairmen of the party, expressed great optimism that PDP will return victorious come 2023.

Various other speakers at the event spoke highly of the presidential candidate and his running mate and re-echoing the party’s message of rescuing Nigeria, calling on citizens of the country who are tired of the bad leadership by the party at the center, to vote PDP..