Nollywood actress Regina Daniels is no doubt living a baby girl lifestyle, as she doesn’t cook for her billionaire husband, Ned Nwoko. 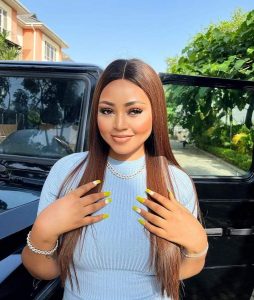 The light-skinned actress, left many brooding as she made a new revelation about her marital life.

Regina shared a video on her Instagram story of her and her husband, Ned Nwoko on their way out.

The private couple, who rarely speak about their personal life, surprised many when they disclosed one of their marital secrets.

Regina Daniels makes new revelation
In the clip, Regina was seen chatting and laughing with her husband when he made mentioned of his looks.

In response, the movie star stated that his new look is an evidence of good living.

Giving her credits, Ned stated that she is the one who cooks for him.

Regina Daniels laughed off his statement as she revealed that she doesn’t cook for her husband.

According to her, people do not even know that she doesn’t enter the kitchen.

Concurring with her, Ned stated that Regina doesn’t cook for him, but she enters the kitchen to cook for herself.

Recall that Regina Daniels, had finally replied those who have been mocking her for marrying Nigerian politician and businessman, Ned Nwoko who is 61 year -old.

The marriage, which was contracted in April 2019, was widely criticised on social media because of the 38-year age gap between the couple.

Replying her critics, via an Instagram video, Regina Daniels asked them to ‘Shut the f**k up.”

Recall that Regina Daniels had earlier shed more light on why she married the Ned Nwoko as his 6th wife.

She said: “I don’t think I could have married someone of my age because I am quite stubborn, very stubborn, my head is not down but with my husband that is not the case because I respect him a lot,” she noted.

The 22-year-old actress had revealed this in a YouTube video interview conducted by Ifedayo Olarinde, popularly called Daddy Freeze.

“How Not Being A Graduate Affects Me In Public” – Actress, Bisola Aiyeola