The Abia state Governor, Dr. Okezie Ikpeazu has solicited the support and assistance of Abia Online media practitioners (OMPAN) in the promotion and development of the state. 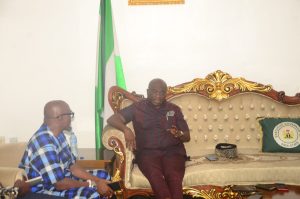 The Governor made this known when he received in audience, a delegation of Abia online media practitioners association led by the Chairman Paddy Anyatonwu at the Governor’s lodge, Aba. 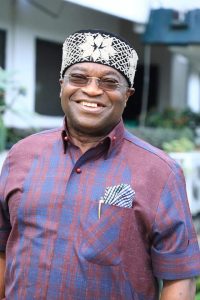 In his speech, Gov. Ikpeazu urged Abia Online Media Practitioners to be mindful about what they say or write about the state, stressing that,” if you can not project Abia state, try to be as objective as possible” 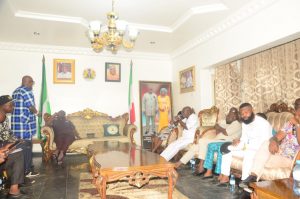 The Chief Executive of the state said ,” I will advise you to be as professional as you can .You can agree with me that some media practitioners both print and social media can be hired to assesinate somebody”. 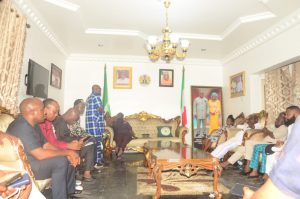 ” Secondly, some people also design or put it in their hearts to distract the government so that they will not achieve anything which is a wicked thought” . “If you are distracting this man so that he will not perform, you are plotting evil against Ndi Abia”, he added.

” So i said to myself if it is to distract me, I refuse to be distracted, i can not be distracted and i can thrive in the mist of noise because i am focused and looking at the most vulnerable people in the state” 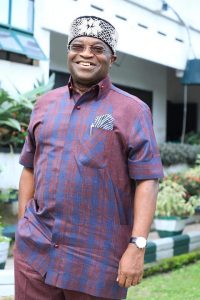 Gov. Okezie Ikpeazu described media practitioners as perception managers who drive the society, adding that, they can make or mare the state.

He then pleaded with Media Practitioners to be careful on who they promote, what they promote and the agenda they are promoting to avoid promoting something that will undermine the state.

Gov. Ikpeazu said Abia state is strategic in the survival of Ndigbo hence.
“we should be mindful of what we write, whether Abia state will grow or not is in your hands and if you de-market your state, eventually in your curriculum vitae for your state of origin, you will put Abia,

“So, I am only urging us that your profession is so important that you are protected by the status in our constitution that tells you how serious the society takes the work you do” he concluded.

He opined that It’s not that those who came before him did not do roads in Abia, he said they did a few interventions here and there, that they did so many interventions but all of these failed.

” So my first question is; why did these interventions failed to avoid making the same mistake that was why I had to use a special technology, taking into cognizance the under ground waters If I did not ask the right questions, I would not have done the right thing and I would not been able to do the right thing in Osusu road and most of the roads i constructed in Aba.

” I am interested in building roads that can stand the test of time so that the person who will come after me will not go back to those roads because we used cement technology which involves cement, concrete with 9 to 12 inchs rod and doing it requires some hard work and time but unfortunately our people do not have patience to wait.

” So the essence of leadership is to solve problems ,not necessarily for people to clap for you.

Governor Ikpeazu further maintained that Abia under him has achieved many things in the area of infrastructure development ,roads construction among other things that posterity will be fair to him .

He words,” I never promised anybody that I am going to do everything but I am ready and prefer to be judged by the things I have done so far and I will submit myself to the verdict of history and posterity because there are things you can not take away from me .

” You can not take away that this government gave Abia long term development plan.This Aba has no master plan, even Umuahia,so it took a leader like me to know that you must do a master plan,so if the social media does not write it today,they will write it tomorrow” he said.

Earlier ,the Abia state chairman of OMPAN Paddy Anyatonwu said Abia online media Practitioners Association came to interface with the Governor, adding that, the social media plays vital role in the promotion and development of every state as well as commending Governor Ikpeazu for being focused despite the series of distractions he has been facing since his emergence as the Governor in 2015.