The founder and Senior pastor of the Omega Fire Ministries Worldwide, Apostle Johnson Suleman, has questioned the police for allegedly killing the arrested prime suspect involved in the Friday attack on his convoy. 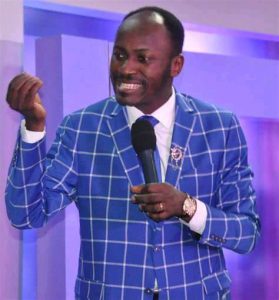 Recall that the ugly incident led to the death of three policemen, two drivers and two others making a total of seven deaths. 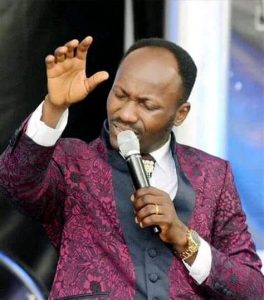 Gunmen on Friday attacked a convoy of popular and fairy cleric in Edo state.

The police while confirming the incident said the apostle was safe and protected.

According to the Edo State Police Command spokesperson, Chidi Nwabuzor, while the apostle escaped unhurt, three policemen and two civilian drivers attached to the Apostle were killed in the attack.

The police command further disclosed that the DPO of Auchi Division and his team mobilised to the scene of the incident when the information got to the and brought down one of the gunmen.

Manhunt for the fleeing criminals is currently ongoing.

Sources said the attack came when Suleman was returning from a foreign trip.The gunmen laid ambush for him along the Benin-Auchi road.

The apostle has been very vocal on the state of affairs in the country particularly the dwindling economy and general poor leadership.

He had spoken severally against the issue of Muslim-Muslim ticket of the All Progressives Congress and had taken a position on the side of equity and justice.

He had recently called on Christians to reject the alleged plot to Islamize Nigeria.

The apostle had in the past been involved in different controversial news with allegations of having affairs with church members. He had since denied all the allegations and said he was not interested in what anyone says. He had told his transducers to go and hug the transformer.

But raising a fresh allegation Suleman, in a tweet, condemned the killing of the suspect who was handed over to the police alive, alleging that it was an attempt to cover up traces that could lead to those behind the attack.

The cleric’s tweet read, “Lies…there weren’t kidnappers… He was caught and handed over and the police killed him immediately. Why? Why killing him on the spot? Who is trying to cover up traces?”

Also reacting, Suleman’s lawyer, Samuel Amune, also demanded a thorough investigation into the case. He slammed the police for killing the suspect who was alive when the youths and the vigilante caught him and handed him over to the police.

He said, “As I speak with you now, I am with Apostle Suleman, and I am examining the vehicle in his compound. One of the boys was caught yesterday by vigilantes and he was handed over alive to the Auchi Police Division.

“It was the youths in conjunction with the vigilante that arrested the boy and handed him over alive to the police. So, the only conspiracy theory that one can easily think of now is that was he (the policeman) acting under a superior order to have done what he has done?

“Was there any gang up or trace that they are trying to cover up? These are some of the theories God will help us unravel as time progresses. The police have not given us any official reason for shooting him dead.”

But Nwabuzor described the allegation that the suspect was handed over to the police alive but was shot dead, as an attempt to look down on the effort of the police

He said, “That insinuation is just an attempt to malign the DPO in charge of Auchi. That is an attempt to dent all the work that they have done. During the attack, nobody knew anybody, and the police were there to prevent any form of attack on anybody.

“The police have a job to protect life and property; it is their constitutional duty. The action of the police was impromptu, the action was going on when the police attended to the distress call and right there at the scene of the crime, everything took place.

“I never heard of any information that the suspect was handed over to the police. Let them (those who apprehended the suspect) come out and make clarification for that. That is not true, it is just hearsay; if anyone has a contrary opinion on that, let them come out and tell the world.”