Members of the Academic Staff Union of Universities (ASUU) of the Olabisi Onabanjo University (OOU) Ago-Iwoye, yesterday, took to the street calling on the federal government to pay the withheld salaries of their counterparts in the federal universities. 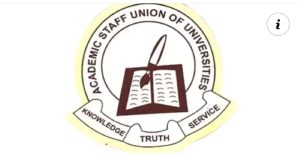 The lecturers, who were led by the branch Chairman, Dr. Joel Okewale, marched from the mini-campus of the institution in Ago-Iwoye town to the entrance gate, deplored what they described as “brazen show of disdain for education and the intelligentsia” by the federal government.

They expressed worries that the government had stepped up its anti- people and oppressive stance by criminalizing strike action and implementing its ‘no-work-no-pay’ on ASUU.

Okewale who addressed the rally, said government’s self-determined policy of ‘no-work-no-pay’ as well as criminalization of strike action, is alien to the university system.

He said the union had taken it as part of federal government’s imposed punishment on ASUU members for daring to challenge it for proper funding of education and fulfil its promise to ASUU and the Nigerian children.

He added that they would not be forced to take the ‘no-pay-no-work’ decision and still be expected to complete the 2020/21 academic session, which the the government opted not to pay for.

He recalled that ASUU suspended its 8-month old strike forced on her by the refusal of government to honour the spirit and letters of the 2009 Agreement and the memoranda thereto, stressing that it is also no longer in contention that government had failed to resolve the matter of renegotiation of the 2009 FGN/ASUU Agreement, deployment of the University Transparency and Accountability solution (UTAS), to replace the discredited and irredeemably deficient Integrated Payroll and Personnel information System (IPPIS), release of White Papers on the Visitation to Federal Universities, release of Revitalization Funds, and stoppage of Proliferation of State Universities among others.

He said, “we would not be forced to take the ‘no-pay-no-work’ decision and still be expected to complete the 2020/21 session, which government opted not to pay for.

“We would not add to the punishment being handed down to the Nigerian children by government’s refusal to adequately educate them in order to be fully prepared for the challenges of nation building”.

“Our union finds it most uncharitable and an utter betrayal of the Nigerian nation, going by the taxpayers’ money spent on the education of this crop of politicians and the entire ruling class that they represent”.

“We commiserate with the Labour Minister, Chris Ngige, who turned from a mediator to a prosecutor just to be the servile face of the ruling elite in their efforts to keep the Nigerian masses uneducated or poorly educated and perpetually enslaved in their own country”.

“We also equally commiserate with his collaborators in and outside government for their different roles in this struggle.

“Posterity would fish all of them out for their excrescences in no distant future. Nonetheless, our union, ASUU, remains committed to the ongoing struggle against the casualization of academic appointments.

“We would not relent until the poor budgetary expenditure to education is reversed and our universities are put on the pedestal for global reckoning”.

“We are also committed to the struggle to liberate our country from the grip of neo-liberal organizations and their opportunistic collaborators in the country.