The fate that befell Japhet Aba, a newly recruited policeman in Nasarawa State, is one that no young man would envy. His heart was torn apart, his ego badly bruised after he left home for training in Bauchi State and returned to discover that his newly married wife had been impregnated by his stepbrother. 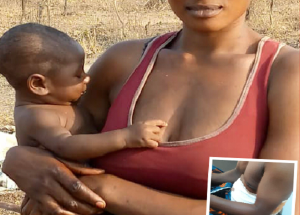 Japhet, a youthful indigene of Doma Local Government Area of Nasarawa State and only son of his mother, had reported in Bauchi for post- recruitment training about three months after he got married.

The graduate of Nasarawa State Polytechnic had joined the police about three months after his marriage with Angela Onuh, a graduate of the College of Agriculture, Lafia.

Although the couple was said to have dated for about one year before they got married, they were said to have struck an agreement that they would have no intimacy before their marriage in September last year. Unfortunately, the intimacy they had after marriage could not result in pregnancy before the husband departed for training.

In the build-up to his departure for police training in Bauchi, Japhet decided to secure an apartment in Lafia, Nasarawa State capital, in a compound where his stepbrother, Samuel Aba, was already living, believing that the primary school teacher would help to look after his wife in his absence.

Japhet, however, got the shock of his life when he returned from Bauchi after nine months and found his wife heavily pregnant. Upon enquiry, Angela told Japhet that she was lured by Samuel into an affair until she became pregnant for him.

She also said that she avoided aborting the pregnancy because her parents, particularly her mother who had died a few years ago, had warned her that she would die if she engaged in any abortion.

While Japhet who returned home to the shocking discovery in July has since reported at his place of primary assignment, matters became worse for him recently as a bullet was said to have hit his manhood during an exchange of gunfire between the police and some daredevil robbers. He is at the moment undergoing treatment in a hospital in Lafia while Angela was recently delivered of a baby boy.

Samuel, on his part, suffered a worse fate as some herdsmen were said to have attacked and shot him dead while he was on inspection of his farm in Doma village. But while Samuel was said to have seen the new baby before his death, Japhet who has been on admission in the hospital, has not had the opportunity of seeing the newborn baby or his wife since July.

Japhet said: “I got married to my wife sometime in September 2021. We had during the period agreed not to mate until we were married, and I didn’t have any issue with that.

“When we eventually got married, we started mating but pregnancy was yet to come when I got recruited into the police.

“Before I left for the training, we had an extensive discussion about the future.

“As the only son of my mother, she was actually in a hurry for me to marry and bear children for her, but my wife and I chose to hold on for a while since I was proceeding to the camp.

“It is quite unfortunate that we had regular discussion on the phone and on a few occasions, she had the opportunity to visit me in camp.

“To my surprise, I came back to meet a pregnancy I didn’t know anything about. Probing further, she mentioned my own brother whom I trusted so much and moved my wife to stay in same compound with him.

“Little did I know that the devil would use my brother to destroy my marriage by impregnating her. When I inquired from Samuel before his death, he told me my wife was the one that lured him into it.

“Samuel told me that my wife had in the course of their discussion confided in him that I was not good in bed; that though she loved me, the few months I spent with her before proceeding to camp, I was lazy in bed and was not satisfying her. So she needed a strong man to satisfy her in bed.

“He said the complaint came several times and he was afraid my wife could go outside looking for satisfaction, hence he decided to lend a helping hand.

“So, I didn’t want to take it up with Samuel when I came back because I blame my wife who allowed the whole thing to happen.

“Even when my mother was pushing me to make an issue of it, I resisted and kept quiet because we lost our father few years back. So I was careful about it.

“I was also confused about the decision to take when I returned to meet her in that condition with her unsatisfactory explanation.

“I resisted pressure from my mother and quickly moved to my place of primary assignment to allow my wife to take a decision that suited her.

“But deep within me, I concluded not to have anything to do with her. She hardly calls and I hardly call her too.

“I decided to reveal this because of the condition I am in now at the hospital. I may not survive this and I want the world to know.

“Unfortunately, Samuel is no more. He died recently from herdsmen attack when he went to the farm in the village. I pray God to grant him eternal rest and forgive all his sins on earth.

“I was not able to attend his burial because I was also here on my sick bed.”

He said since late Samuel was not married, the new baby might become his own depending on what the mother of the baby wants but she is certainly no longer his wife.

Angela was in tears when our correspondent contacted her, lamenting that she had deeply offended her husband (Japhet) and prayed that he would find a place in his heart to forgive her.

She admitted that all his husband had said was true but added that it was the devil that actually tempted her into allowing her husband’s brother to sleep with her.

But she explained that Samuel made maximum use of the opportunity. “So much so that I could not let him go, and the result is what I am facing now. I am passing through the most turbulent time of my life.

“I never intended to cheat on him when we finally agreed to marry, having abstained from sex throughout the period we were dating.

“I never contemplated it, but the temptation of sex pushed me into it. I consider it the devil’s work.”

Angela said her parents had warned her not to do abortion no matter the situation saying that she would die if she tried it.

“We didn’t have sex before we got married. It was actually what we agreed on. But after we came together, he was still avoiding getting intimate.

“I always had to make the first move or dress to tempt him. The few times we had fun, it would be over too quickly and I ended up not satisfied

“The naked truth is that I wanted a man who could satisfy me. Unfortunately, Japhet was not the type. And when I gave his brother Samuel an opportunity, he proved himself and blindly, we moved on in error. I am a human being. I have blood flowing in my veins.

“My husband did not offend me but I deeply offended him by my actions. My marriage was reasonably good and I like my husband, but there has never been any great passion between us.

“Meeting Samuel in the absence of my husband who was in police training camp was an opportunity to have a romantic connection with great sex.

“Me I like sex but my husband didn’t like it often. And from day one, I knew that if my husband got to know, he would be devastated.

“I actually didn’t know how it would end, in tears probably, and this is the result. But Samuel was really not afraid when the bubbling was going on.

“I was really confused and worried about what was going on within us, yet Samuel carried on as if there was nothing between us when we were with neighbours in the compound. Yet he showed a lot of passion in the bedroom and we became attached to each other.”

Asked how it all began between her and Samuel, Angela said: “It started like a joke during a gist with Samuel and some of my friends and course mates. A discussion came up about sexual performance and our conversation attracted me to Samuel.

“I love my husband, but not getting satisfactory sex pushed me up the wall.

“I know that what was going on between me and Samuel was wrong. I feel bad because Samuel is a better lover than my husband. As a result, I wanted sex with him always.

“What kept me going with Samuel was his power to act. My husband is a gentleman and very decent, but his brother was so sex mad to my satisfaction.

“I have decided to reveal everything to you because he also revealed everything to you. I know I have wronged him and he does not need me again as his wife, more so that his manhood is damaged.

“I’m afraid of visiting him at the hospital because he might kill me. But I pray for his quickly recovery. I also pray for the repose of the soul of Samuel, the biological father of my son.

“I will struggle to train him if God keeps him alive. It is not his fault. I made a mistake but I followed the words of my mother not to abort any pregnancy no matter the situation.

“It was actually a mistake that I allowed Samuel. But what if it is the only child I had in my womb?

“I will explain the genesis of everything to him, and I will want him to become a lawyer or a medical doctor.”