The member representing Isiala Ngwa South State Constituency and immediate past Speaker of the Abia State House of Assembly, Rt. Hon. Barr. Chikwendu Enyinnaya Kalu has charged youths as well as political leaders to embrace attitudinal change in their approach to criticism and leadership challenges respectively. 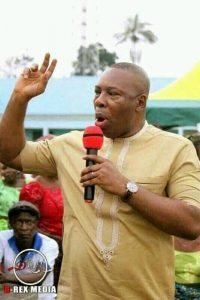 Rt. Hon. Kalu was speaking to a large delegation of youths and political stakeholders across party lines from the 10 Wards and major political blocs in Isiala Ngwa South LGA, who paid him a New Year courtesy visit at his country home earlier in the week. 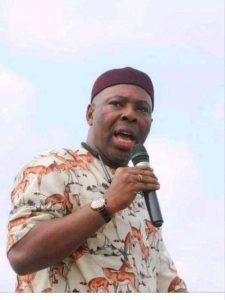 In their various speeches earlier, the youths said that they had come to interact with Rt. Hon. Kalu as the New Year begins, and seek clarifications from him regarding his seeming silence in the House of Assembly in recent months, his position on the forthcoming general elections and his contributions to the physical and infrastructural development of Isiala Ngwa South. 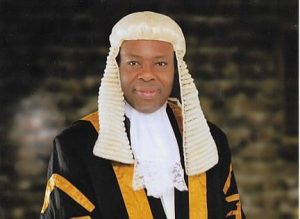 Responding, Rt. Hon. Kalu thanked the youths and stakeholders for their visit which he suggested should become a regular convention on bi-monthly or quarterly basis. He said that such interactions, if well-coordinated, could effectively bridge the gap of understanding between leaders and the people, and usher in new levels of peace and harmony within the polity.

Regarding his seeming silence in the House of Assembly in recent months, Rt. Hon. Kalu stated that it is a matter of perception, emphasizing that he does not have to be loquacious or noisy in order to be seen as one discharging his constitutional duties in the House.

In his words, “Silence is constitutional and relative to its relevance or impact in one’s schedule of activities at a given period. As a matter of principle, I am not a noisy person neither do I seek undue attention to myself in the discharge of my duties. I am laser-focused on the real issues of legislative business and public welfare and I cannot be distracted.”

“The question I often ask myself, with loyalty to my conscience, is: am I delivering results? If the answer is yes, then whether I am seen to be silent or otherwise is just a matter of perception, or a function of the political bias which my critics may be trying to promote. My colleagues in the House can attest to the fact that I am usually one of the most vocal persons on the floor of the House during plenary sessions. As Speaker, I took hard decisions including the suspension of an erring LGA Chairman. The full spectrum of my contributions to legislative business is documented and available for anyone who wishes to see it”

Speaking further, Rt. Hon. Kalu said that since being elected into the House of Assembly, he had done quite a lot regarding physical and human development in Isiala Ngwa South LGA.

“I am essentially a legislator, but that notwithstanding, I have executed road grading works across the LGA on annual basis. Currently, some road grading works which I commissioned since the last quarter of 2021 are on-going. The National Identity Card Centre at the LGA Headquarters was established and furnished by me. I have a functional liaison office which you all know and people are employed there. I facilitated the appointment of more than 51 Special Assistants and Senior Special Assistants in the Office of the Governor, just to mention a few things.”

“I see charity as a vocation. I have given out more than 20 cars and 27 motor cycles, absolutely free with no conditions attached. I am currently constructing 11 houses for some widows across the LGA at personal cost. ASUBEB buildings in the LGA to the credit of my efforts are more than 20. I have provided educational support grants to countless students and equally empowered a good number of youths with business support facilities. I do not have to make noise about these things. And some of you would be shocked at the level of conspiracies that frontline leaders, including myself, are subjected to. So while I encourage criticism as a vital component of democratic growth, we should realize that it is only informed criticism that brings respect to the critic. The opposite is as malicious and condemnable as fake news.”

On the forthcoming general elections, Rt. Hon. Kalu charged the youths, as well as political leaders, to embrace attitudinal change and seek new windows of mutual understanding, mutual accountability, cooperation and unity of purpose for the progress of Abia State. He said that in order to take Isiala Ngwa South and Abia State to higher levels of development, everyone, particularly the youths, should begin to see politics more for what it is – a platform for selfless public service, and not a profession in which anything goes. He admonished youths who make enemies for themselves by attacking perceived political adversaries of their principals to desist from such indulgence, seek enlightenment and realize that politics would always be a game of interests in which there are no permanent boundaries.

Part of the high points of the meeting was the presentation of tool kits to trainees for solar energy installation sponsored by Rt. Hon. Kalu and facilitated by Hon. Darlington Ahuruonye.

In his vote of thanks at the end of the interactive session, leader of the delegation, Engineer Chima Uwaoma thanked Rt. Hon. Kalu for his time, patience and thorough explanations. Engr. Uwaoma also thanked Rt. Hon. Kalu for proposing that the interactive session should hold regularly, and assured that those present during the inaugural session would meet subsequently and consider a time table in that regard.