Abia Polytechnic, Aba says it’s attention has been drawn to a frivolous and malicious publication in both the online and mainstream media over an alleged certificate racketeering in the institution in relation to a National Diploma result issued to one Gregory Okwuchukwu Okoafor. 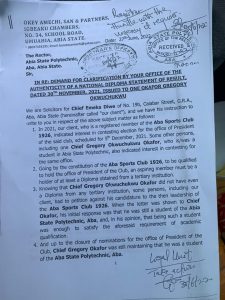 The Polytechnic stated that while it may not want to join issues with mischief makers who are out to tarnish the image of the citadel of learning, it wish to categorically state that the institution has at no time compromised it’s standard by engaging in certificate racketeering. 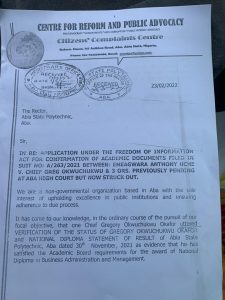 In a statement made available to newsmen in Aba by the Public Relations Officer of the Institution, Mrs Stella Nwakanma, she revealed that the student in question was duly admitted by the institution and also fulfilled all conditions required for the issuance of his National Diploma Statement of result. 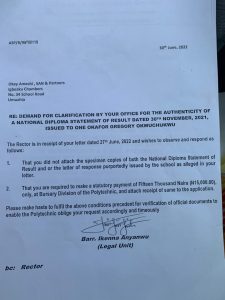 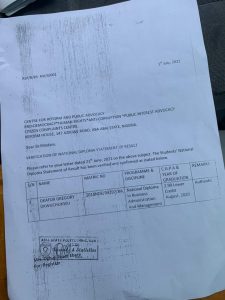 The release stated that the institution is always ready to respond to any inquiries pertaining to its operations in conformity with laid down procedures, pointing out that the institution is baffled that some media houses have thrown to the winds ethical issue of balance reportage, which requires that the positions of parties involved in an issue should be sought before publishing unverified reports. 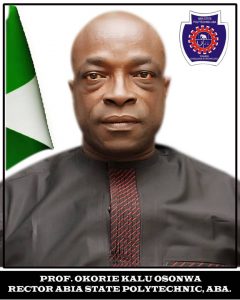 In the statement, Abia Polytechnic, appealed to the public to disregard such malicious publication, and at the same time warned mischief makers to desist from dragging the hard earned image of the Polytechnic in the mud over selfish purposes and interests considering that the institution is apolitical in its operations. 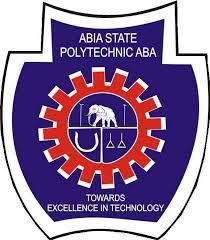 Similarly, the institution has mandated its legal team to explore all legitimate avenues to seek redress on the issue that is capable of demeaning the image of the institution.

Speaking to newsmen in his office, the Registrar of the institution, Mr. Chinyere Oriaku warned mischief makers and politicians not to drag the name of the school into their game of politics and warned that such action will not be taken lightly by the school.

Mr. Oriaku, and the Head of Department, Business Administration, Dr. Clement Ukandu produced all the necessary documents of the student in question in the presence of newsmen which were sighted and perused, to certified that the student was properly admitted and that he graduated from the institution without baggages as insinuated by rumour mongers.

Reacting, the Rector, Prof. Okorie Osonwa said he signed the certificates of the student and miffed at the way Abians that are supposed to encourage the institution which is a thing of pride for Abia would rather prefer to go pedestrian, spreading false rumours by people who don’t quite understand the workings of a citadel of learning.