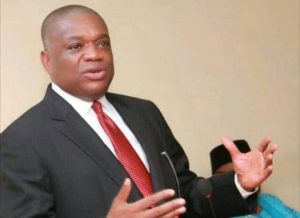 Kalu, who is a senator representing Abia North in the senate, is also seeking an order of court striking out his name and that of his company, Slok Nigeria Ltd, from the N7.1 billion fresh charge filed against him by the EFCC.

The former governor, through his lawyer, Ikoro N. Ikoro brought an application for the two reliefs predicated on the judgment of Justice Inyang Ekwo of the Federal High Court, delivered on September 29, 2021, which barred the Federal Government from retrying the former governor.

Kalu, who is the Chief Whip of the Senate, submitted that having been freed, it behoves on him to apply to the court to formally strike out his name and Slok from the charge sheet.

However, the scheduled re-arraignment of the former Commissioner of Finance in Abia State, Jones Udeogu, whom the court had ordered his retrial as well as hearing of all pending applications could not go on.

Slok’s counsel, Chief Chris Uche SAN, and Kalu’s lawyer had informed the court that the EFCC’s counsel, Rotimi Jacob SAN, served his response to their application which they served on him since October 2021, on Monday, January 10, 2022.

Though, Ikoro and Uche expressed dismay over the way the EFCC lawyer decided to wait to serve his counter-affidavit on Monday night, said they needed time to reply.

In view of the reason, the trial judge, Justice Ekwo adjourned with the consensus of parties to March 10, for hearing of Kalu and Slok’s applications as well as EFCC’s motion on notice seeking transfer of the matter to Lagos.

Kalu was charged alongside his firm, Slok and Udeogu, and while the duo was convicted and sentenced for 12 years, the company was wound up.

It was the opinion of the court that since Kalu was not mentioned in the judgment of the Supreme Court, which had nullified his conviction and sentencing and ordered a retrial, the judgment did not apply to him.

The judge also reasoned that it was only the former Commissioner of Finance in Abia Government House, Jones Udeogu, that could be re-tried as only his name was mentioned in the Supreme Court judgment.