Governor Okezie Ikpeazu says that the absence of a Federal Secretariat Complex in the State is an anomaly which needs to be addressed immediately by the Federal Government. 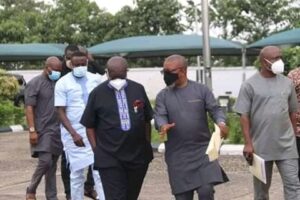 The Governor made this known today at Government House Umuahia Umuahia while receiving in audience, the Federal Commissioner representing Abia State at the Federal Character Commission, Hon Henry Ogbulogo who led a delagation of the State Office of the Commission on a courtesy visit to the Governor.

Governor Ikpeazu stated that a situation where statutory agencies and other offices of the Federal Government in the State stay in rented accommodations at different locations in the State Capital is very undesirable and affects cohesion and synergy.

According to the Governor, “if there was a Federal Secretariat in the State, all agencies of the Federal Government operating in the State will be accommodated in one purpose built environment. This will create a platform for cohesion and smoothen inter-agency cooperation. Again this will also help the State conserve its limited land space because different agencies of the Federal Government will no longer be making individual requests for land to build their own separate office”.

The Governor while decrying the lack of Federal presence in Abia State likened the situation to what happens in the oil and gas industry where Abia State has continued for over 60 years to contribute to oil and gas production in the country but none of the oil companies have an office in the State.

“These oil and companies see Abia as a drilling point only. They have no offices here. They come, drill oil and go. Their set up offices in other states and pay tax there. Yet Abia remains the safest and most peaceful Niger Delta State with zero incidences of vandalism of oil installations and kidnap of oil workers”.

The Governor urged the Federal Commissioner to lend his voice to the plea by the people and Government of Abia State that these obvious anomalies be corrected.

He congratulated the new Federal Commissioner and urged him to ensure that issues affecting Abia State in the Commission receive adequate attention.

The Governor thanked the Commission for erecting their own permanent structure in the State Capital and assured that the issues raised in his address will receive adequate consideration.

Speaking earlier, the Federal Commissioner, Hon. Henry Ogbulogo thanked the Governor for receiving him at short notice and expressed the appreciation of the Commission to the State Government for granting their request for a parcel of land to build their permanent office in the State and informed the Governor that the office has been completed and fully occupied by their staff.

He also thanked God for restoring the health of the Governor.

State Deputy Governor, Sir Ude Oko Chukwu, the Secretary to Government, Barrister Chris Ezem, Members of the State Executive Council, Chief of Staff to the Governor, Dr ACB Agbazuere and other top officials of the State Government witnessed the event.