Okorocha commends Ikpeazu, says Abia one of the most peaceful in Nigeria

The Senator representing Imo West Senatorial District and immediate past Governor of Imo State, Owelle Rochas Okorocha, has lauded the leadership qualities of Governor Okezie Ikpeazu which has made Abia one of the most peaceful States in Nigeria. 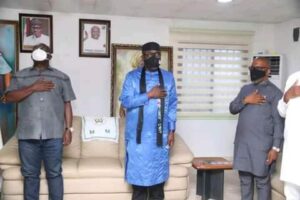 Senator Rochas Okorocha who was speaking during a visit to Governor Okezie Ikpeazu at Government House, Umuahia, stressed the need for leaders in the South East region of the country to always work together despite party differences.

Senator Okorocha who also stressed the need for all Igbo sons and daughters to always have the development of the region in mind, noted that the unity and progress of the Igbo nation should come first before politics. 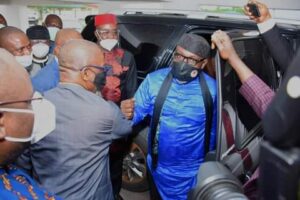 He promised that federal lawmakers from the region will continue to do their best at the national level for the overall development of the South East and commended the Governor on the way he has been able to handle the issue of the dreaded covid-19 pandemic in the State.

Responding, Governor Okezie Ikpeazu described Senator Rochas Okorocha as a courageous and focused Igbo leader who has stood firm in defense of the Igbo nation, adding that the Igbo nation has always been proud of him. The Governor expressed hope that the regular intervention of Senator Okorocha at the national level will continue to pave way for the development of the South East region.

The State Chief Executive thanked the likes of Senator Rochas Okorocha and other leaders for standing by him while he was undergoing treatment of covid-19, describing Senator Okorocha as a brother and dependable ally.

The Chief of Staff to the Governor, Dr ACB Agbazuere among other government officials were present during the visit.

Full list of 17 executive orders Biden signed on day one as US president.