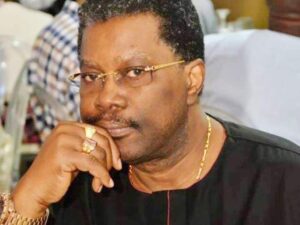 His death has left many extolling his personality.
Below are what you should know about him:
1. Akin-Olugbade was born on April 2, 1956.
2. His father, a wealthy businessman, Babatunde Akin-Olugbade was the Balogun of Owu.
3. He attended Corona School, King’s College, Lagos and London University.
4. Akin-Olugbade had his Master’s Degree in Law from the University of California and obtained his doctorate degree in Company Law at Cambridge University.
5. He was a lawyer and his business interest include property development, construction, manufacturing, others.
6. He holds the traditional title of the Aare Ona-Kankanfo of Owu Kingdom.
7. The billionaire was a great lover of high-end Rolls Royce cars.
8. He bought his first Rolls Royce in 1984.
9. Until his death, Akin-Olugbade was the chairman of Bolu Akin-Olugbade Limited and GMT Limited.
10. He reportedly died at the Paelon COVID Center, Ikeja, Lagos.