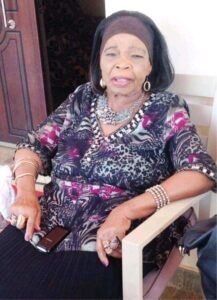 Lady Aguiyi-Ironsi was to clock 98 years on November 21, this year.

The deceased widow’s husband, General Johnson Thomas Umunnakwe Aguiyi-Ironsi was killed in Ibadan in a bloody coup in July 1966.

Lady Aguiyi-Ironsi never remarried ever since.

In the Government of President Olusegun Obasanjo, one of her sons was appointed a Minister and Obasanjo always kept close contact with the family which he visited last in December 2019.

However, a letter from the family and signed by her son,
Amb. Thomas Aguiyi-Ironsi confirmed the incident.

The letter on behalf of the family was addressed to the Abia State Governor, and read:

I would like to discuss further details at your earliest convenience