In a shocking move that has jolted Catholic community in Nigeria and beyond, the Governor of Imo State, Senator Hope Uzodinma has taken a swipe at Archbishop Anthony Obinna, immediate past Archbishop of Owerri and his successor Archbishop Lucius Ugorji following a minor disagreement that occurred during the installation of Archbishop Ugorji. 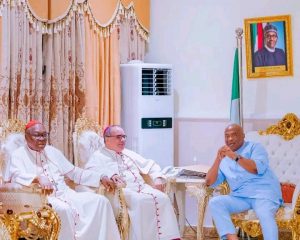 In what the Governor termed a “disrespect to constituted authorities”, he lampooned both clergy and the organisers of the colourful event for “failure of the Catholic Archdiocese of Owerri to allow him make use of the Governor’s lectern with official seal, when he delivered his address during the inauguration of the New Archbishop of the Diocese, His Grace, Most Reverend Lucius Iwejuru Ugorji. 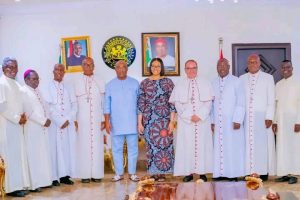 In a release signed by Lady Chantel Chinyere Adanna, Senior Special Assistant on Networking and Communications, Governor Uzodinma further condemned the Clergy for a “disregard and abuse to a Catholic Governor”.

Fidelity Leaderboard
Continuing, Governor Uzodinma, who bemoaned the “lack of respect by the catholic church”, noted that ” every election year, they (catholic clergy) will always route for their fellow Catholic to be voted in as a Governor especially in Imo State but immediately they get it, they are always the first to fight, disrespect, denigrate and abuse their Catholic Governor”.