An Army Major identified as Churchill Orji has been reportedly killed by gunmen in the troubled Azia area of Ihiala Local Government Area, Anambra State. 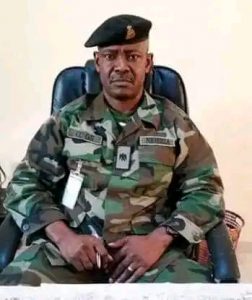 It was learnt that the Army officer was killed while in an operation in the area.

Confirming the development, a schoolmate of the deceased, Leonard Edu, said, “He was my senior in Agulu Boys Secondary School. Our labour prefect then. It’s true he was killed by unknown gunmen at Azia, in Ihiala.

A tribute by another source read: “Rest in peace my brother from Nneogidi village, Agulu, Major Churchil Orji killed yesterday (Sunday) at Azia/Ukpor defending the South-East from the marauders.”

“An Anambra indigene Major C Orji was killed in Ihiala/Azia axis by unknown gunmen. Father (God), we are at your mercy in Anambra state. May the soul of Major C Orji rest in peace,” another wrote.

When contacted, the state Police Public Relations Officer (PPRO), Mr Tochukwu Ikenga, said he was yet to receive a report about the incidents.

Ihiala area, a border town to Imo State from Anambra State has been notorious with the activities of kidnappers and gunmen.

However, the past two months had recorded relative peace, following the killing of the suspected leader of the dreaded unknown gunmen called ‘Double Lion’, operating from Orlu area of Imo State through some communities in Ihiala and Nnewi South in Anambra.

Double Lion and four members of his gang members were killed by a suspected rival group at Ihiala in June at a time moving around the state had become like a nightmare.

Information has it that Double Lion originally belonged to the mainstream gunmen, but later pulled out to form a more dreaded group.

His group was the one allegedly terrorizing most communities in Anambra South senatorial zone and forcing people who have functions to pay them hundreds of thousands of naira before such functions could take place.

Once the money was paid, organisers of the event were strictly warned never to invite security operatives.