Due to the out break of the Novel corona virus pandemic (Covid-19), schools have been shut down for quite a while now, precisely from March till date. However, The federal government of nigeria promised to reopen the sectors of the economy which they gradually and eventually did. 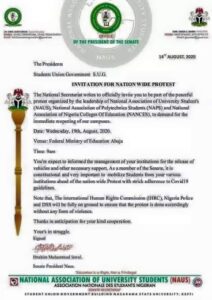 Other sectors of the economy were subsequently opened in due course, but the educational sector is still left in the procrastination stage, leaving it disdained and wish-washed.

One can gladly recall as at July, 2020, the National association of university students (NAUS) embarked on a social media protest, airing out their diverse views and opinions as regarding the re-opening of universities in the country. The exercise went quite well as you would have guessed, Quite a good number of concerns were laid to the federal government on social media, stating that other sectors have been given the listening ears, but the students are less catered for. The message probably didn’t get to the top level of government, which eventually left the university students in an uncomfortable state.

The criteria included that the exercise will be done with strict adherence to the Covid-19 protocols as the Nigerian police force (NPF) and the department of state service will be present to ensure a violence free exercise.

The exercise is scheduled to hold on Wednesday, 19th August, 2020 at the federal ministry of education, Abuja. Students having seen this on diverse social media platform are ready to embark on the exercise.