The Joint Action Committee of the Senior Staff Association of Nigeria Universities and the Non-Academic Staff Union of Allied and Education Institutions has suspended its ongoing strike for a period of two months. 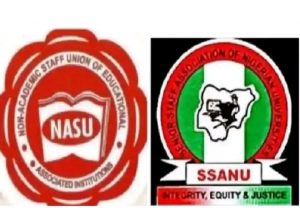 A member of JAC and SSANU National President, Mohammed Ibrahim disclosed this in a telephone interview with The Nation on Saturday in Abuja.

He said the suspension will take effect from Wednesday next week.

“Yes, we have suspended the strike for a period of two months,” the SSANU president said.

According to Ibrahim, the Federal Government has committed N50 billion to pay earned allowances for members of SSANU, NASU and the Academic Staff Union of Universities.

He also said the unions reached an agreement with the government on their conditions of service with the hope that the agreements would be implemented within the two months period.

The strike by SSANU and NASU has led to the suspension of the issuance of academic transcripts; the mobilisation of graduates for the compulsory one-year service organised by the National Youth Service Corps.

In a statement on Saturday, the SSANU president said: “Today, after a series of engagements with the Honourable Minister of Education and having considered the issue that led to the strike and having satisfied ourselves that government, this time around, has committed itself to agree to respect the agreements that have been reached at the meetings, we believe that it is only honourable that we give the government the benefit of the doubt while the needful is being done at the government’s end.

“To this end, we hereby inform you of a two months window given to the government to actualize the agreements that have been reached. The two months window is in the nature of a ceasefire and does not represent a closure on the industrial action.

“It is our sincere prayer, given the assurance made by the Honourable Minister of Education and our commitment to ensure an end to the ongoing impasse, that the two months’ opportunity will suffice for actions to be taken and the entire matter laid to rest.