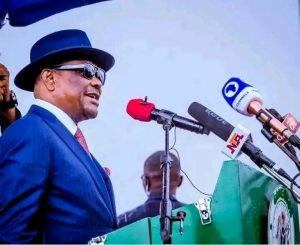 Wike who asserted this while hosting Cross River State PDP governorship and all state and national assembly candidates along with local government chairmen of his private residence in Port Harcourt, Rivers state, Wednesday night, also said genuine efforts to amicably resolve the impasse in the PDP were being frustrated by rent-seekers in the party. 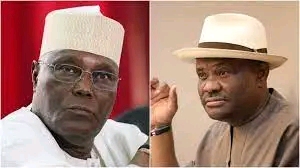 “He (Ayu) said, if the presidential candidate comes from the north, he will resign, which means he has had this in mind. Now, the thing has come to reality, now resign, he says no. And people are saying go and talk to Wike.

The governor described as hypocritical, PDP members criticising APC Muslim/Muslim ticket while supporting a particular region of the country to retain the presidency for another eight years.

“This is period the power game is being played. If you don’t have it now, forget it. If anybody tells you, let Ayu resign after election is conducted, then you are a foolish person. This is the time decision is being made.

“This is the time the presidential candidate, national chairman and the leader of campaign will sit, when election is won in February, before the president is sworn in, decisions would have been made.”

In gratitude to his Cross Rivers visitors he said, Wike said, “If there is nothing I achieved, I can go home and sleep that I won Cross River State. Not only did I win, I won very well. I feel so happy and that tells you of people who have character of steadfastness. People who will never be pushed around for whatever it is.

Cross River PDP governorship candidate, Sen Sandy Onor, who led the delegation, said Governor Wike remains such a trail blazer for justice, fairness and equity that no living person in the contemporary history of the PDP has made more sacrifice for the party than Wike.

Onor commended governor Wike for his steadfast support to the party in Cross River, adding that the intent of the visit was to express their profound gratitude for his unparalleled benevolence.

Meanwhile with widespread resentments yet to settle on Governor Wike’s recent engagement of 28,000 Special Assistants, the governor on Thursday announced a review of the said appointment to 50,000 (Fifty Thousand), aside the 319 Wards and 40 LGA Liaison Offices also appointed by the governor.

The governor has further hinted on the intent of the State Government to acquire any structure perceived as currently defacing the Old Government Residential Area (GRA), Port Harcourt.

Wike during inspection of ongoing state projects on Thursday, said, “Some institutions like the Nigerian Railway Corporation would not even take care of their property, their buildings.

“We have no choice but to make sure we bring back what Old GRA used to be. Those property that are defacing Old GRA, I can assure you, government will take every step to acquire them to make sure the place looks neat as it is supposed to be.”