The Economic and Financial Crimes Commission has traced at least 17 multi – million naira properties to the Accountant-General of the Federation, Ahmed Idris, The PUNCH has learnt. 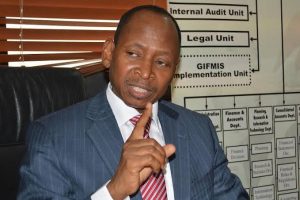 This is just as the Minister of Finance, Budget and National Planning, Zainab Ahmed, suspended Idris who is currently being investigated for fraud to the tune of N80bn.

An official of the EFCC, who wished to remain anonymous, said the properties traced to Idris are located in Kano, Lagos, Abuja, Dubai and London.

He, however, said preliminary investigations showed that the nation’s chief accountant allegedly used proxies to buy some of these properties. The commission would therefore need to invite some of the proxies of the accountant-general.

The detective added that from all indications, these properties were purchased while Idris was in office and did not declare them before the Code of Conduct Bureau as stipulated by law.

He added, “About 17 houses in London, Lagos, Kano, Abuja and Dubai have been traced to him. In Abuja, some of the houses are located in serviced estates.”

The EFCC had in a statement on Monday announced the arrest of the accountant-general for fraud to the tune of N80bn.

The statement read in part, “The commission’s verified intelligence showed that the AGF raked off the funds through bogus consultancies and other illegal activities using proxies, family members and close associates. The funds were laundered through real estate investments in Kano and Abuja.”

It was learnt that Idris came under scrutiny last year following allegations that he offered huge sums of money to a family in order to secure the marriage of their 16-year-old daughter.

The uncle of the teenager, Nura Bagudu, had told The PUNCH in an interview that the accountant-general offered properties and gifts to the young lady and her family and had lodged complaints to the Federal Government.

“He told the young lady to go to Abuja and choose any house she wanted and he would buy it for her,” Bagudu had told The PUNCH.

Also, the accountant-general had in 2021 launched Gezawa Commodity Market and Exchange Limited which he had openly admitted to owning.

Idris stated this when he received a delegation of Kano Concerned Citizens Initiative led by its late Chairman, Alhaji Bashir Tofa. The project is said to be worth huge sums of money which is far more than his income.

An EFCC official said the legal department was already getting an order to remand the accountant-general and get an interim forfeiture on some of his properties pending the completion of investigations.

Meanwhile, the Federal Government on Wednesday announced the suspension of the accountant-general in order to allow for a seamless investigation.

In a letter conveying Idris’ suspension, the Minister of Finance warned the embattled public official not to visit the office at any time, adding that the suspension was in line with the public service rules.

The letter titled, ‘Letter of Suspension’ read in part, “Following your recent arrest by EFCC on allegations of diversion of funds and money laundering, I write to convey your suspension from work without pay effective May 18, 2022.”

Efforts to get a response from the Spokesman for the EFCC, Mr. Wilson Uwujaren, proved abortive as he did not respond to calls.