Officials of the Execution Unit of the Federal Capital Territory High Court, Abuja and some policemen, yesterday, raided the Asokoro, Abuja home of Senator Andy Uba over an unpaid loan of N50 million from Oranto Petroleum Ltd., owned by billionaire and philanthropist, Prince Arthur Eze. 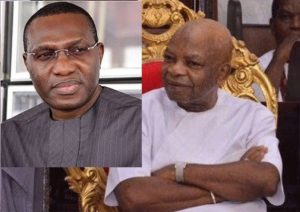 It was gathered that the court officials and policemen seized three vehicles belonging to Senator Uba, sequel to the judgment of an Anambra State High Court delivered on March 6, 2017, by Justice C.N. Mbonu Nwenyi of the Aguata Judicial Division Ekwulobia.

In his ruling, Justice Nwenyi held that Senator Uba, as the defendant in the case, has not denied he received the friendly interest-free loan from the plaintiff. The judge further held that having gone through the statement of defence of the defendant, he did not disclose any good defence to the suit and in such circumstance the plaintiff is entitled to the judgment.

The execution of the judgment came about as a result of a motion ex parte dated May 5, 2022 and filed same date praying the court for some reliefs and subsequent order of the FCT Capital Territory High Court dated June 30 2022.

An official of the court confirmed the execution of the order at Senator Uba’s house.