Rt. Hon. Emeka Ihedioha, a former governor of Imo State has been caught on tape saying there won’t be peace in the state till his successor, Hope Uzodinma, leaves the Government House. 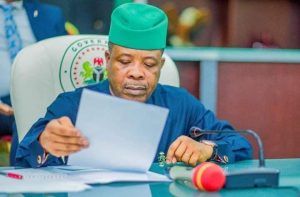 The Supreme Court had on January 14, 2020 installed Uzodinma of the All Progressives Congress as the new governor of the state, after declaring him amid controversies as the valid winner of the March 9, 2019 governorship election in the state.

In the audio obtained by SaharaReporters, the former House of Representatives Deputy Speaker was heard vowing to make the state ungovernable for his successor.

A check by SaharaReporters on the number using true caller confirmed it belonged to the former Governor.

Governor Uzodinma had in the past blamed the killings recorded in the state on aggrieved politicians, adding that the sponsors of the violence were persons who were unhappy with his achievements after one year in office.

“I pray that God will touch the hearts of these people who are sponsoring the killing of innocent ones, burning houses and destroying public property in the name of politics.

“I have crosschecked since the inception of this mindless blood-letting in Orlu, Orsu and other communities in the zone, not one Peoples Democratic Party, PDP, a person has died, their houses burnt or attacked.

“It is clear to me, therefore, that these killings are the handiwork of politicians who are after the APC members,” Uzodinma had said.

In recent months, there have been attacks on security operatives and government property in Imo.

Ahmed Gulak, a former aide of ex-President Goodluck Jonathan, was one of the victims of the attacks.