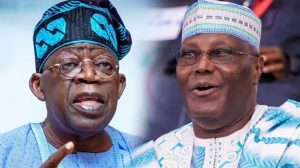 Speaking on Saturday at the 7th edition of Kaduna Economic and Investment Summit (KADInvest 7.0), Tinubu had said El-Rufai “turned a rotten situation to bad one”.

Although the presidential candidate later attributed the mumbo jumbo to a Freudian slip, Shaibu in a statement on Sunday, said the Kaduna comment was one gaffe too many, insisting that “Tinubu is tired and should go home and rest.”

“We wish to call the attention of Nigerians to the unsuitability of the presidential candidate of the All Progressives Congress, Bola Ahmed Tinubu for the nation’s highest office on account of series of blunders he has made since he publicly declared his presidential ambition.

“When you look at the APC presidential candidate, you will see someone that is tired and weak. You have also heard the many gaffes that have come from him even before the kick-off of campaigns. The Kaduna comment is one gaffe, too many, and therefore unpardonable. You don’t have to be president at all costs; when you are tired, you go home.

“Nigeria is currently in a dire situation with every sector of the economy in deep decay; therefore, the nation cannot afford to hand over a sick nation to a sick president,” the statement said.

He recalled how on June 8, 2022, Tinubu staggered and nearly fell while stepping out to make his address at the Eagle Square, the venue of the party’s convention but was helped by a security agent.

Shaibu noted that during his speech at the convention, the hands of the former Lagos governor were also visibly shaking, a possible sign of ill health, emphasizing that the nation needs a healthy person that can withstand the rigours of the office of President.

“The media is awash with reports of how the APC presidential candidate in August 2021 spent over 60 days, touring hospitals abroad, where he was treated for an undisclosed ailment. So, is this the kind of president that we want for our country at a time of unprecedented economic and security challenges?

“This country deserves a fit leader. The office of the President is not for ailing people. Tinubu has tried his best but he is now weak and tired and should be allowed to go home and take a deserved rest,” Shaibu said.

He said it is only in Africa that persons who are unfit for offices on account of ill health insist on holding offices even at the expense of the wellbeing of the economy and the citizenry.

He urged the electorate to vote for Atiku at next year’s poll, insisting that the former Vice President and the PDP is the only pathway to changing the fortunes of Nigeria.