Governor of Abia State, Dr. Okezie Ikpeazu, has extolled the virtues of Mrs Nwamara Catherine Nnaji, the first female chartered accountant from Abia State, as she was invested as the 10th National Chairperson of the Society of Women Accountants of Nigeria (SWAN) in Lagos.. 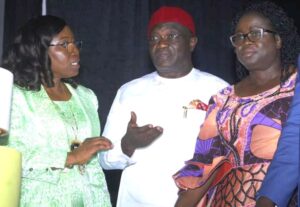 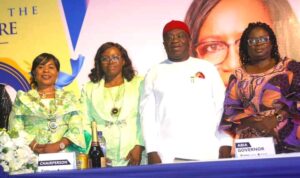 Gov. Ikpeazu, who was the special guest of honour at the investiture and inauguration of the new executive of the body of SWAN, described Nnaji as a worthy ambassador of the state and added that her emergence has etched Abia State in the annals of history.

He said, “It is a celebration of the achievement of women. I am here to celebrate the first from Abia State. Those who know Nnaji these last 40 years will not be surprised about the height she has attained today. On behalf of the people of Abia, I want to tell you that you are our ambassador, you will not fail us, you will not fail women and you will not fail the Accounting profession.”

The Governor described Accounting as a noble profession and said he was sure that the profession would do much better with a woman at the helm of affairs.

Dr. Ikpeazu also noted that the investiture of Nnaji is one step closer to addressing the marginalisation of the South-East geopolitical zone in the scheme of things in Nigeria.

“There are many things the South East clamour about today, one of them is marginalisation. I will like to thank SWAN for listening to our cry and finding one of us worthy to lead their group”, the governor added.

SWAN also announced some scholarship awards to four female undergraduates from different universities at the event.

In her acceptance speech, Nnaji noted that SWAN has set great objectives for itself in the last 43 years of its existence among which is to achieve standards set in gold, even as it has recruited thousands of young women into the accountancy profession,

She said, “The Society of Women Accountants of Nigeria, is a body with great objectives set for herself over the years. In its 43 years of existence, SWAN empowered hundreds of young women with requisite skills for financial independence, awarded scholarships to several indigent students, provided succour and assistance to the sick, the elderly, the disabled and the motherless children. In addition to these laudable achievements, SWAN provides a social support system for female chartered accountants, an avenue for its ladies to gather together as professional women to relax and unwind, avenues to hold family picnics to nourish family bonding with our spouses and children among others.”

Nnaji joined SWAN in 1988 and rapidly rose in her professional ranking, becoming Assistant General Secretary from 2009 to 2013 and Secretary-General from 2013 to 2017. She also served as 2nd vice Chairperson from 2017 to 2019 and 1st Vice-Chairperson from 2019 to 2021. she also chaired several Committees in line with SWAN yearly activities and served as an active member under some.