Mr Ahmadu said he killed his parents because they refused to accept the truth about the Prophet Muhammad. 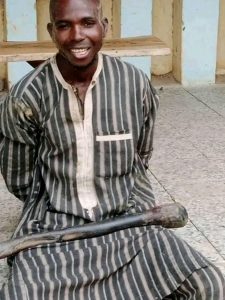 Munkaila Ahmadu who killed his parents in Gagarawa Local Government Area of Jigawa State said he did so because they uttered blasphemous comments against the prophet Muhammad.

Mr Ahmadu, a singer and, a member of the Tijjaniyya Islamic sect, said his parents mocked and called him a mad person and opposed him being a praise singer for the prophet.

PREMIUM TIMES reported how the Police in the state arrested Mr Ahmadu, 37, after he killed his parents and injured two others on Thursday.

He used a pestle to kill his father, Ahmad Muhammad, 70, who is the village head of the Zarada community in the Gagarawa council area, and his mother Ahmad Hauwa’u, 60.

In a recorded video in the police custody shared with PREMIUM TIMES, Mr Ahmadu said he has no regret for what he did because he was commanded to do so.

“I am a praise singer for the prophet, this year I intend to do a video for my song and God willing, I will do that, I will be free because God is with the righteous person, that is why I am not worrying over my action,” Mr Ahmadu said in a video recorded by the police.

“My parent doesn’t (don’t) like the prophet Muhammad because I adore him, they called me a mad person, I pleaded with my father to support my work (praise singing), and I told him that I don’t womanise, I am not a gambler, I don’t do drugs, and I don’t steal, but he refused to.

“My mother used to go to neighbouring towns to blackmail me, telling people to reject me whenever I came to sing praises to the prophet because I am mad and I refused to work on the farm.

“I am now in police custody because, by human thinking, I did a wrong thing but in the sight of God and the Prophet what I did is the right thing,” Mr Ahmadu said.

Mr Ahmadu, a father of five children, said he suspected his father of having an affair with his wife.