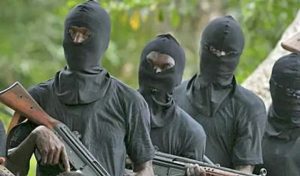 DAILY POST gathered that the gunmen who operated on a Sienna Ash-coloured-tinted glass were dressed in police vest.

Our correspondent gathered that the abductors stormed the church immediately after the Sunday Service at about 1:30pm shooting sporadically.

Narrating the ugly development, a worshiper , who gave her name as Dr Blessing, said the church had just concluded thanksgiving while members were heading to the car park to drive out to the venue of merriment when the gunmen struck.

He said, “The church had just dismissed so everyone was heading to the car park with the intention to go to the home of the member only for an Ash-coloured Sienna vehicle to drive in shooting sporadically.

According to him,” The abductors who wore police vests were shooting right there at the car park. They first dragged a woman but after some seconds, one of them shouted it’s not this one.

“Before they went to drag Mrs Abioye shooting directly to scare people away. Though she tried to resist, there was so much commotion. And within minutes, they drove off still shooting.”

When contacted, the Police Public Relations Officer (PPRO), Michael Abattam, highlighted that the command is yet to be informed about the ugly incident and promised to brief us with further details.