Charles Soludo, the governor-elect of Anambra State has appointed Nigeria’s former Minister of Education, Obiageli Ezekwesili as the head of a transition team ahead of his takeover from incumbent governor, Willie Obiano. 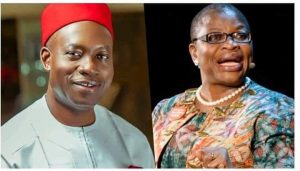 Mr Soludo, an ex-CBN governor and candidate of the All Progressives Grand Alliance (APGA) was declared winner of the November 6 2021 governorship election in Anambra, having defeated his closest rivals, PDP’s Valentine Ozigbo APC’s Andy Uba had 43,285 votes.

While the governor-elect is yet to make a formal announcement, official sources familiar with the development told Peoples Gazette that Mr Soludo who would be sworn in as the state governor in March has appointed transition members, with Mrs Ezekwesili being the head.

The transition team’s inauguration, according to the sources, will hold on January 20, at Agulu Lake (Golden Tulip) Hotel in Anambra.