The Governor of Abia State, Dr. Okezie Ikpeazu has called for calm from all the parties involved in the crisis in Owaza, Ukwa West LGA, urging them to give peace a chance and allow the State Government an opportunity to find a solution to the matter. 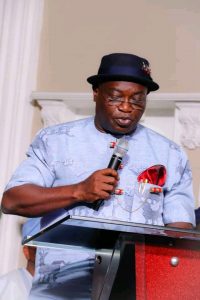 The Governor expresses grave concerns regarding the ongoing reprisal attacks in Owaza by soldiers of the Nigerian Army following the alleged killing of a solder in the community, and tasks the soldiers to show a high level of patriotism and not allow the situation to degenerate any further, as the State Government continues to engage the leadership of the Army on the issue.

Consequently, the Governor hereby invites the following leaders from Ukwa West LGA to a crucial meeting –

1. Member representing Ukwa West at the State House of Assembly

5. The President – General of the Asa Improvement Union

7. The Leader of the Asa Improvement Union, Youth Wing.

8. The Chief of Staff to the Governor

9. The Honorable Commissioner for Homeland Security.

The meeting is scheduled to hold on Saturday, January 22nd, 2022. Venue is the Governor’s Lodge, Aba and time is 3pm prompt.

All invitees to the meeting should be seated before the arrival of the Governor.