An Elder statesman, Elder (Dr.) Emmanuel Adaelu has lauded the various developmental strides of Governor Okezie Ikpeazu saying that the Governor has personally impressed him. 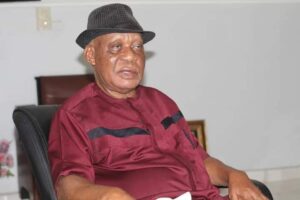 Elder Adaelu made his feelings known during an interaction with news men in his office at Osisioma-Ngwa, Aba. According to him, “Dr. Okezie Ikpeazu has personally impressed me, impressed many well-meaning Abia people” He said the Governor’s persistent efforts in improving on roads that have been neglected over decades is commendable, adding that he is happy that the first Ukwa/Ngwa man to occupy the governorship position in State is doing great.

Elder Adaelu, who narrated how difficult it was to produce a Governor of Ngwa extraction recalled that “from the birth of Independence even after the creation of Abia State we had had no chance. It is not because we don’t have intelligent people, it was not because we are lacking the way withal in terms of education and other necessary credentials to be able to govern a State, we kept quiet thinking that since we entered into democracy since 1960 that things were going to be done democratically unfortunately it kept going one side, even when we are in Eastern Nigeria” He appreciated Senator T. A Orji for assisting in achieving the dreams of his, saying that “after series of visits, by the grace of God and and to the gratefulness we have for former Governor, T.A Orji, he shared our view and accepted that this time governorship of Abia State should shift to Ukwa/Ngwa people, we are very happy. That’s how our present Governor, Okezie Ikpeazu came into office”

He described the Governor as a good leader, “to me Okezie is a very good leader, he knew the desire of his people and he went straight to do that”, stating that “with the little resources, he has evenly distributed what is made available to him to all sides of Abia, particularly in road construction and maintenance. We are very happy about that”

On the recent report of the National Bureau of Statistics which placed Abia as the third State behind Abuja and Lagos in Nigeria in foreign investment inflow, Elder Adaelu said “I’m impressed also to say that there has been very effective utilization of the scarce resources to ensure that our place is improved as you are entering Aba from whichever corner, you see road maintenance and rehabilitation. It gives me pleasure”

The business mogul and life Vice President of Nigerian Association of Chamber of Commerce Industry, Mines & Agriculture (NACIMA) said it is the Governor’s efforts towards developmental activities that resulted to the feat achieved, maintaining that “before now people do not really want to invest in Abia because they did not see an encouraging leadership but government of Okezie Ikpeazu has given hope to those who want to invest in the State” He said the Governor “is also assuring them of the security of their investments, if they would take interest to invest.”

The elder statesman, who advised the Governor to improve on the level of industrialization and education funding while asking him to do more in the remaining years of his office to ensure that his name would be written in gold as the first leader of Ukwa/Ngwa. He enjoined Abia people and residents to show good example of followership with gratitude and not followership that is too critical of good efforts, saying that they are expected to cooperate with the Governor.