The Nigeria Customs Service (NCS) Federal Operations Unit Zone ‘B’, says it has seized 180 pieces of assorted Jack knives and other items with duty paid value of N466.33 million. 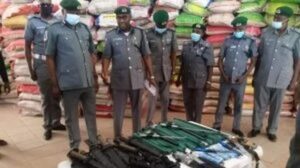 The Comptroller of the unit, Mr Al-Bashir Hamisu, said on Wednesday in Kaduna while briefing newsmen that the contraband were seized between Feb. 16 and March 1, 2021.

According to him, the 180 jack knives were confiscated around Tsafe in Zamfara from a suspected bandits’ courier, who abandoned his motorcycle and fled.

He said that the customs personnel also seized 55 kegs of PMS, 49 kegs of gas, 592 bags of foreign rice, 237 kegs of vegetable oil, 88 bales of second hand clothes and 94 cartons of spaghetti, among others.

The controller added that 13 vehicles and one tricycle used for smuggling activities were impounded within the period under review.

Hamisu attributed the successes recorded by the command to enhanced collaboration with the public.

He thanked the public for their cooperation while calling for more collaboration to safeguard the economy from smugglers and saboteurs.