Fear has enveloped Sabon Garri area of the metropolitan part of Kano State following the killing of two Igbo traders by some yet to be identified gunmen.

The deceased are Ifeanyi Elechukwu, aged 41, who probably was the target of the attack and his friend, Chibuille Emmanuel, who was shot on the leg, but eventually gave up the ghost at a private clinic, International Clinic, in the state capital. 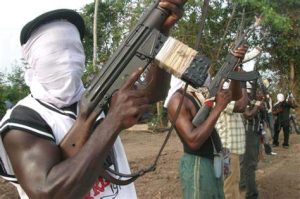 The incident, according to witnesses, occurred at about 8.50 pm Saturday night, after the deceased, who was a battery dealer at Shop No. 25, Court Road by New Road, was said to have been invited to the shop by his assailant who posed as a customer.

While the two deceased persons were shot at close range along Court Road by Niger Road in Sabon – garri, the gunmen who appeared to have trailed them to the spot, sped off immediately after the attack.

When this Correspondent arrived at the spot, the whole scene was cordoned off by different security personnel while a huge gridlock had circled around the intervening roads, forcing motorists to divert to other routes.

The Public Relations Officer, Nigeria Police, Kano State, SP Abdullahi Haruna Kiyawa confirmed the death of the two traders and disclosed that the police had commenced full investigation into the tragic incident.

In the meantime, the gun attack has further triggered off security concerns in the state as many places of worship were manned by heavy security presence during the service hours on Sunday.

It would be recalled that the Kano State government, as a part of security concerns, has recently barred commercial tri-cyclists from operating beyond 10.00pm in the night.