For a house wife and mother of two, Mrs. Offiong Harrison Efa, the future depends on the Fabrication and and Contruction Academy of West Africa, Calabar, where she and hundreds of others are currently acquiring for free, different skills. 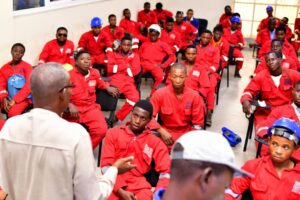 Mrs Effa hopes to become a self-employed skilled woman so as to eke out a living at the end of her training.

The housewife who describes the academy as a life changer has therefore, commended Governor Ben Ayade for offering her the opportunity to fine tune her future. 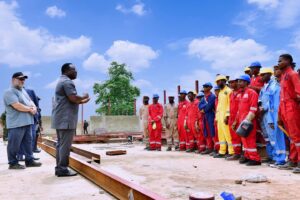 Efa who is among the hundreds of trainees at the academy is specialising in different types of electrical installations.

The fabrication academy is one of Governor Ayade’s skills acquisition programmes established in March 2021 to offer free manpower training to indigenes of the state, especially the youth.

The mother of two who spoke on the sidelines of a written and practical examinations at the academy by students specializing in welding disclosed that “since I got here six months ago, I have acquired so much knowledge on electrical works.

Commending the governor for the free skills training programme, Efa said her excitement knows no bounds, adding that
“I am very happy to be here and to make use of this opportunity the governor has created for the youths.

I am a married woman with two children but the opportunity to learn a trade and be able to fend for and assist my family was too good to turn down and so that’s why you see me getting involved even in a male dominated profession. I cannot thank the governor enough for teaching me how to fish.”

Similarly Daniel Effiom Archibong, who spoke shortly after his written and practical examination on welding, said the Academy “has impacted very positively on my life in the past six months. I can now construct, weld and fabricate different kinds of machines including iron bending and other kinds of work beyond welding.

Other governors need to emulate Governor Ayade’s initiative in order to generate self-employment opportunities for the teeming army of unemployed youths in the country.”

On how the academy impacts on the economy of the state and the individual trainees, Charles Parker, an American consultant to the fabrication academy, disclosed that “every graduate of this academy will be well equipped to start their own businesses because one of the courses they are taking while they are here is entrepreneurship.

“This is so because at the end, whenever they graduate they will be given some token to help them set up their own businesses.”

Parker said the thinking of the governor “is to empower the youths so as to rid the state of all the social vices associated with unemployment. The academy is not just for men. We have women here, we have physically challenged, we also have hearing impaired students that come here to learn a skill set so that they can provide for themselves and families.”

Speaking on why he put the trainees through formal examination, Commissioner for Youths and Skills Acquisition, Signor Omang Idiege, said “the students are being examined both practically and theoretically to test the training received within this six months.

Idiege said “Most of the instructors are retired permanent secretaries, retired directors with some of them notable businesses owners both within the state and outside. We advertised for instructors and about 89 people applied through intense interview with the consultants. About 13 of them were chosen among the 89 who applied and this was based on their experience and pedigree.”

The Commissioner disclosed that the academy doesn’t charge tuition, as according to him, “Governor Ayade, based on his passion, ordered free enrollment as an encouragement for youth to come in, starting from obtaining the forms which saw thousands of youths indicate interest.
The forms were free and no form of tuition is being charged by the academy.”