Musa Kamarawa, a close associate of notorious bandit kingpin, Muhammad Bello, also known as Turji, has revealed the names of local informants and collaborators supplying uniforms, food and drugs to terrorists operating in the Sokoto-Zamfara axis from northwestern Nigeria. 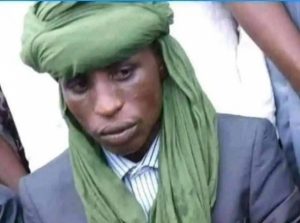 Kamarawa (33) in a video clip, revealed that the kidnapping kingpin’s arsenal is a variety of assorted weapons including AK 47 rifles, machine guns, rocket launchers and anti-aircraft weapons.

“Turji is my bosom friend, we are always in touch and seek each other’s advice on our operations most of the time,” revealed Mr. Kamarawa. He gave the name of a Dr. Abubakar Hashimu Kamarawa as a supplier of shoes and military uniforms for the bandits.

Kamarawa, the nephew of former Sokoto state governor, Attahiru Bafarawa, who revealed that police are looking for his older brother Basharu for colluding with immigration officials to import weapons, gave the names of other collaborators as “Yahaya, Dan Tseka, Gwandi and Summalawa”

He said that some of them who studied health-related courses supply the hard drugs that the bandits were taking before they go for operation.

“Pabro, who is one of them, owns an Igbo pharmacy, while Muntari Ajiya is Hausa,” he said.

Regarding Turji’s manpower force, Kamarawa said at least 100 armed men guard his base, adding that “Turji is surrounded by more than 100 armed men from his main base of operations, in addition to other units.

“The only difference between the khaki they wear and the ones worn by real soldiers is the dirt. They are always dirty but real soldiers have a cleaner appearance,” he said.

He further revealed that Kabiru Maniya, Alhaji Shadari are among Turji’s men who update him on his gruesome deeds by sending him WhatsApp photos.

Kamarawa, who regretted his actions, promised to cooperate with Nigerian security officials to expose all criminal bandits in the region.

Kamarawa was caught in Abuja along with one Bashar Audu, a Nigerien who was caught with a shipment of Indian hemp for Turji’s men.

Turji is a ruthless 28-year-old bandit leader operating in Sokoto and Zamfara states. He has repeatedly rejected peace agreements with the Zamfara state government. The only time he said he was open to dialogue was when Kaduna-based Islamic cleric Ahmed Gumi visited his camp in Zurmi, Zamfara state.

In September 2021, reports emerged that the notorious bandit kingpin had moved his headquarters from Fakai in Zurmi, Zamfara state, to Isa, eastern Sokoto state.

Its new headquarters, according to multiple sources, including one from security, is situated between Tozai and Suruddubu.

Speaking about the reported relocation of bandits in Sokoto East, the senator representing the area, Ibrahim Gobir, said that most of the bandits had relocated to Sabon Birni and Isa Local Government Areas as a result of military operations in course in the axis of Zamfara.

Speaking on the Senate floor, Gobir said that the bandits have now infiltrated the area due to the absence of a major military offensive against them in the area.